Samsara Blues Experiment- One with the Universe (Electric Magic EMC007) 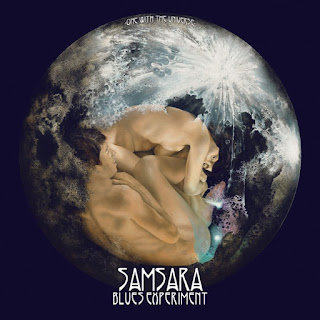 It has been a few years since the last SBE record. Christian, the voice, guitarist and leader of the band has been very busy with making solo records and searching deep into his soul and this comes across on this new record. The lyrics are more personal.  The musical pallet has also expanded a bit with the addition of some keyboards. Vipassana starts things off with some nice heavy riffs, combined with a spoken word like vocal, nice eastern guitar phrasing and vibe. Powerful track (you can hear it below). Sad Guru Returns is an instrumental track. Glorious Daze is a bit more laid back with some Fender Rhodes like piano and sitar. Around 3.5mins Christian kicks in with a short organ solo. A more raga like structure takes over. It ends with some nice organ playing. One with the Universe starts off builds on the bass line and some bluesy guitar but a sort of ominous drone choir keyboard and then the track starts to build up but has a long instrumental beginning and there are no vocals before 9mins. The bass playing, drumming and playing by the band are awesome on this track. Wow.. Eastern Sun & Western Moon closes out the record. This one again features a lot of melodic guitar lines and organ. Christian does not forget to play these great solos either. A great heavy build and ending. What a great record and one of my faves this year. Not sure how they pull this off live as a 3 piece but maybe Christian has a keyboard to play live and can loop some of this guitar riffs or ???? Great record.

http://samsarabluesexperiment.com
Posted by Scott aka. Dr. Space at 1:55 AM