This was our first concert after moving to Portugal. BONG played about an hour away last month but it was a difficult day, so we did not make it. White Hills, and Aerosmith both recently played in Lisboa but we did not make it to those shows either.

Sebaidella is a very cool place about 20mins drive from our home. It is a cozy stone house with a large room with a pretty big stage and a room that holds a few hundred and then the bar area, where the band was set up on this night.  It was described as “Wild improvised music to let your hair down”. The band is: Peter McBeau - Keyboards, Rob VanGough - Drums - and Kin Von Kopf – Violin, Bass and electric/acoustic Guitars, lead vocals. 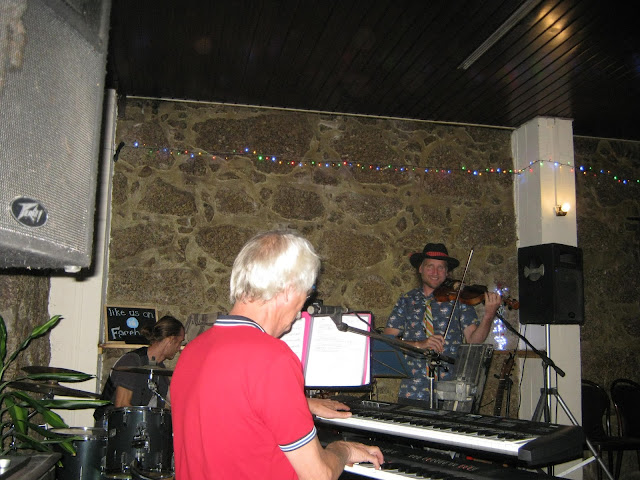 The band started off at 21 and played two sets with a break and ended about 00:30. I guess there was about 60 people. It was a great crowd and during the 2nd set about 15 people were dancing. The vibe was amazing. The band started off with some gypsy Balkan inspired semi-improvised stuff with violin, keys and drums. All the musicians are fantastic. Peter plays bass lines on his upper synth and mainly piano stuff but sometimes organ as well on the lower keyboard. Kin, just rips it up on the fiddle/violin. Powerful drums by Rob, which sometimes overwhelmed the small room and you could hear little else but the drums (not that often though).  After 25mins or so, Kim switched to electric guitar but had some tuning issues with the capo on so switched to his acoustic guitar and they played a bunch of songs that they are currently recording at Peter’s studio.  Very positive vibe with a strong eco-political lyrics but good ones. People were smiling! 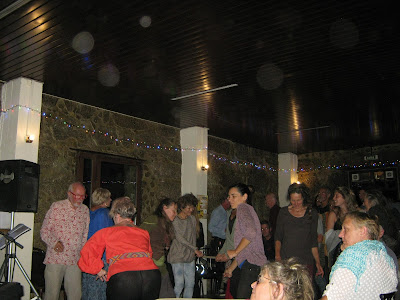 The 2nd set was more dancing with some funky electric guitar and even a Doobie Brothers cover and a couple of others that had people singing and smiling. While the fiddle playing was more gypsy Balkan in the first set, it took a much more country bluegrass flavor in the 2nd set and even a small Indian inspiration during the start of a jam but it did not go in that direction in the end.

We had a great evening and met some really nice people. It was 99% Dutch and English people, no local Portuguese.  I look forward to hear their record and see them play live again!  This place has live music every Saturday night in the summer and sometimes on Friday as well. I am sure we will go here often. Cool place.. 1€ beers, 70 cents for a glass of wine.. Very cheap….