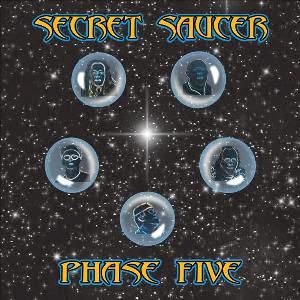 Secret Saucer are back with their 6th release. Dave Hess and Steve Hayes are the core of the band with various other members coming and going. This is the first SS release without my friend Greg Kozlowski from Arc Met featured on at least a few songs. Ted Boburka plays percussion and drums on most tracks and Bill Spear most of the bass. Dan Schnell, John Pack and Steve Bemand handle basically all the guitars. This album actually is very synthesizer oriented and much less guitar than any of the bands previous records and start off with Blue Star, which is only synths and some percussion with a vocal or sample way in the back to give it this sort of spaced out tribal feel. Spin Drift is an uptempo happy track that reminds me of some weird late 70’s commercial film soundtrack. The Visible Light is more like 70s Tangerine Dream but with some fiddle here and there. The Alderson Point is the first track with a more hard rock guitar and heavy bass line. John Pack plays the lead guitar on this one. Three Days of Darkness starts is made of 3 parts and starts off with a slow doomy part with a lot of cool synths and great soloing by Steve Bemand. Great 8½ min track. The Quencher starts with a repetitive synth loop and then the drums come and then the bass and then the guitar and off we go for another track that has a really happy feeling to it but still very spacey. Space Walking has these really cool long synths space drones (make voice like sounds later) while the other synth plays the lead line. Mr natural is the most experimental and out there tracks to start as the synth line slowly fades up and the track takes off. Features Greg Klucher on Flute and James Dunn on drums and has a sort of jazzy feel to it. The final track is called Nova Star to end a really cool album and for sure the most melodic and sort of mainstream one the band has made. Great stuff.

Http://secretsaucer.bandcamp.com
Posted by Scott aka. Dr. Space at 11:48 PM