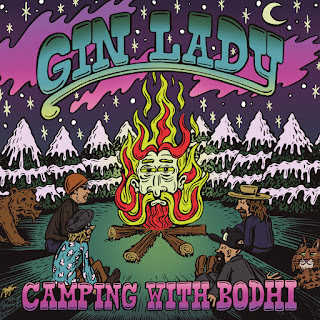 My wife and I have really grown to love this band and it nice that the last few years they drop a new record every 2 years. Electric Earth for me was the bands peak and the last one, Tall Sun Crooked Moon, took a while for it to grow on me and I have to say the same with the new one.  The first listen, I was actually a little disappointed and thought the songs were a bit too much like we heard before (and they are in many ways) and not so inspired. The main difference with this album though is that Niklas Ålund is no longer in the band, so they are no a four piece and they used a different studio in Stockholm but the same producers.  Anyway, the album starts off with Underground and the core Gin Lady sound is intact after some backwards guitar and noodling about as they build up the tempo and a good groove starts to develop. Johnny's voice is so distinct and the music makes you happy. I am guessing he is also playing the keyboards on this album? Not sure.  For Everyone sounds like at 12 string guitar to start and some familiar melodies and arrangements are found interspersed in this track, which does not offer much new.  Haven't seen you Lately has a bit harder riff and a bit more uptempo. Fields of Joy (see fan made video below) starts slow and then this sort of Allman Brothers inspired dual guitars and organ kicks in before they kick into what is sort of their strummed signature sound. That ends side A of the LP. I love your Babe starts off side B and features the organ prominently and has a very much Rolling Stones like riff and feel to start. Not my fave song. Solider On also has this US southern rock feel with the harmony guitars and just a slow stoned groove. One of my fave songs on the record. Freedom Rider is makes you smile with a bit of piano action although not that strong mixed in to the song. Very southern rock for sure!  Celebration Blues is a footstopping little number!!!  Only happy songs from these guys! We are Free Now is the closer and sounds much like what proceeded it.

Very well recorded, played and produced but I think the band should work with different producers to push them to try out more new different avenues in their music as most of these tracks come across as really derivative the last two records with the same types of backing vocals, instrumentation, lyrical arrangements, etc.. I love the band but I would like to see some progression, take some chances rather than just recreating variations of the same songs they have written in the past.  Despite the critic, I still enjoy the record a lot..