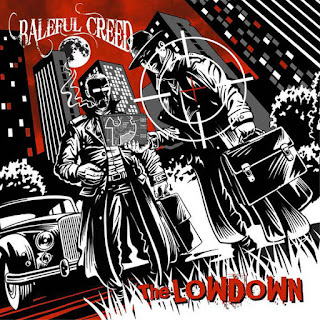 This is a cool band that hails from Northern Ireland and describes their music as Doom blues boogie!  The band is a self-contained entity, releasing and promoting their music on their own.  The band has been around since 2009 and this is their 3rd album.  It features 10 tracks of well produced, rocking tunes.  Mr Grim is a mid-paced rocker. Vocalist-Guitarist, Fin, his voice and style reminds me a bit of the singer from Dozer. This is quite a catchy track and features a short wah guitar solo by John.  Bass player Davey adds some backing vocals on the chorus. The Phoenix has that loose string bass thump at the start of the track on this slightly slower track. Fin has a really cool rock and roll voice, gritty, powerful.  There is a mini-break in the track but no real guitar solo, where they could have broken it out and ripped it up. Pilot my Head is another slower track with a bit heavier riff and a track with a load of interesting guitar riffs at the end of the track.  Riled up speeds things up and the CD needed that at this point.  The track features some excellent drumming by David and real heads down stoner rock on this one. Tramalamapam slows things down and has a doomy riff and a very short sort of bluesy guitar solo but a lot of nice changes before a more rocking solo at the end.  That dry snare drum is really mixed loud and pounds you in the face on this track. Drums are rocking but quite dominate a bit too much for me.  Confused is a bit more of a footstomper and features Keith Weir on keyboards, which is a cool addition.  They add a bit of an effect to Fin’s voice at the end of this track. This the only track where they band might be considered to have a bit of jam, all else has been very focused and composed. Great tune.  One Shot starts with a sample from a movie then the bass, drums kick in first followed by the guitars. It is a slow track focused on the story told by Fin.  End Game has a simple catchy riff and you can just see the audience shaking to this one.  Line of Trouble is like a ballad and with some great vocals. Southgate of Heaven ends this cool CD and again features Keith on the keyboards to add a new dimension to the track.  This has one of the best riffs on the record and the organ like keyboard compliments this heavy rocker and lets the band jam out a bit.

This is a band that I think would go down well with the Classic rock magazine staff and audience and at a festival like Download in the UK.  Great album guys.