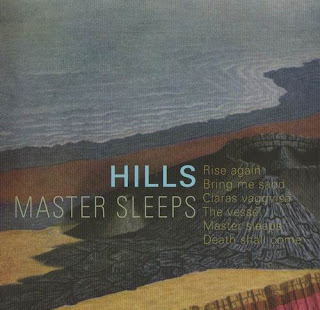 The Swedish band, Hills have released their 2nd record. The first vinyl one as well as the CD edition on Sulatron is sold out now. Transubstans has released the new CD and the vinyl was put out by Intergalactic Tactics (the bands label?). The record sleeve is very minimal as far as information goes. No label information, no band information, nothing about where or when it was recorded. If you have never heard of this band they play totally instrumental psychedelic rock with guitar, bass, drums and organ (often with a drone). Anyway, the album starts with Rise Again sounds a lot like Wooden Shjips with the echoey voice, repetitive groove and spacey sound. I like the very cool spaced out phase guitar on this track. Bring me Sand is next and starts with a droning organ and then the very cool guitar comes in and this track really builds up with a sort of eastern spirit and a very psychedelic track with a sort of tortured guitar at the end. Claras vaggvisa is a slower track lead by the organ player. Side B starts with The Vessel and picks up the tempo again and features a vocal sample and a great guitar solo. The title track is the longest on the record and the band are really spacing out on this one and this could be a Wooden Shjips outtake the way the guitar, vocal and drums are played (less the bass line). This is a very cool record and I like it more than the first one, which was fantastic.
http://www.transubstans.com
Posted by Scott aka. Dr. Space at 10:53 AM