Capt Beefheart- -every album, every song by Opher Goodwin 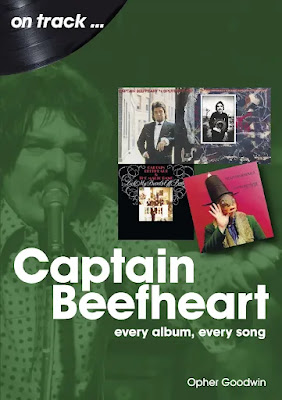 Don Vilet (Capt Beefheart) was certainly one of the most interesting and strange musical characters to have come out of the 60s acid scene, along with Arthur Lee (Love) and Syd Barrett (Pink Floyd)…   I have never been a huge CB fan but really liked some of the stuff by him. This book has allowed me to dig way deeper into the music and the man!!   The author is a huge fan and CB was clearly his fave band ever and he dedicated a lot of his life to his music and the band.  This comes thru in the book clearly but also makes him a bit too biased at times..

As with most of these books, he goes through in an album by album order but since many of Beefheart¨s albums were recorded and not released at the time, he has put them all in order, even though some were not released until the 80s and 90s..  I think this was a good idea. I tried to listen to the albums in order while reading and writing about the book (to the announce of my wife!!).

Safe as Milk, clearly a classic and described in great detail. It was interesting to know that Ry Cooder hated the final product.  I was quite surprised that Zappa was not mentioned when some songs like Dropput Boogie and Autumn¨s Child are very Zappa inspired!!  Mirror Man, which was recorded in 1968 but the label would not release it was ditched and did not see the light until 1971.. A lot of strange weird jams with acidic lyrics and many tracks were recorded and some of these were attached to the Safe as Milk rereleases but not described with that album but with the Mirror Man album sessions. There were a lot of bonus tracks on later editions of these and Opher does a good job of describing these, most of the time.

The author spends quite a lot of time on trying to give his best explanation of what the lyrics/poems might have meant…  He is probably not far off in most cases but unless you actually asked Don (and he was probably very unlikely to tell you the truth!), this is the best you can get, I think!!!  A lot of strange poetry for sure some very very out there!!!!

Since Don retired from music in 1982 and headed to the forest to paint, that was the end of the albums but there are tons of compilations, live albums, Magic band albums, that Opher goes through, not track by track but pretty much covering them all.  He also has a list of all the solo releases by the main musicians from the band.

A very interesting artist and book. Beefheart was always one of those artists like Henry Cow, that was sometimes just too weird for most people.  You will learn a lot reading this book for sure but mostly Ophers opinion of the music. He was and still is truly in love with his music.