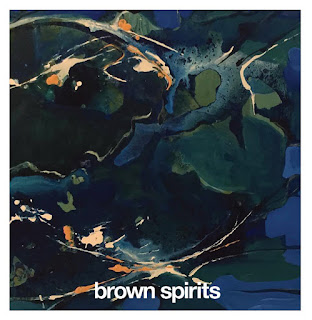 Brown Spirits is a new Australian duo featuring Tom Wold (everything except percussion) and Agostino Soldati (drums and percussion). The recordings are quite low fi (most noticeably the drums- very thin and dry sound) and all recorded on a Tascam portastudio.  The album features 9 tracks of spaced out instrumental music, some of which is quite funky!  Lysergic Library starts things off with a mid paced drum and slowly some guitar and organ are layered in and then the bass line. The guitar is mostly making sounds and no chords or riffs until the solo. Quite a laid back vide to the music despite the quick tempo of the drums. The end section there is some cool guitar stuff. Kaiser-Panorama follows with two layers of guitar, one psychy, the other sort of a skank or funky riff. Drums and bass are quite repetitive throughout the track. Flying and Falling starts with some noisy guitar action. Later the drums come in and as well as a throbbing bass and a guitar solo of sorts and then it fades out. That River ain’t for Swimming ends side A. This track has a bass line that sort of leads the track, mixed a bit more to the front and a bit more grooving with the drums.  Guitar is just noodling over the top with some nice use of delay.  Side B starts with 4 tracks all under 4mins. Xan in Red starts with bass, drums and an organ solo. Quite a relaxed vibe. Back to Atoms is quite funky with two layers of guitar (one quite heavy) and a fast rhythm. The solo was quite cool on this track. Wish they had stretched this one out. Another Vintage Phase (See video below) starts with some keyboards that fade out and then the drums and a totally different synth with a dark feeling (also to the bass) follows. Precursor is a short track of less than 2 mins with some guitar feedback, over the steady bass and drum groove. Optokinetic Response is the longest track on the LP at 9mins and starts off with kraut like feeling with organ and a repeated guitar line before the power chord riff kicks in and out as they come back to the organ and main guitar riff. This track has the best guitar work on it and later a long spaced out organ solo.

I feel this band really needs a bass player to complete the project and allow them to explore musically a bit more and not be limited by not having it. Some great stuff on this record though.