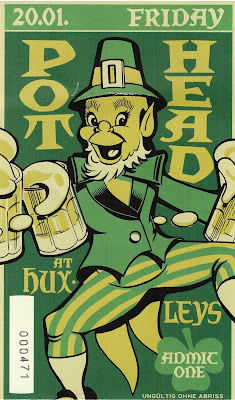 This is my first show of the year. It has become a bit of a ritual to come to Berlin and see my friend Silvana, go to the annual Pothead show and hang out with the band. The guys are so cool and I really enjoy hanging out with them. You were never are quite sure what they are going to play in the old days as the original drummer (Sebastian) knew all 160 pothead songs but the new drummer, Robert, he has limited them in that sense so they play a lot of the same sets. Last year I had talked with the guys about playing Year of the Rat, and one of my faves, Run. Little did I know that they would play both!!

The band has recently re-released the Pot of Gold EP from 1999 (See my review soon). Brad went back to the original tapes and made new mixes. They would introduce some of those songs tonight including the unreleased track Bettina.

Anyway, the show tonight was not quite sold out but there were still a lot of people. Silvana and I got up in the front by Brad. I had a foto pass so I could go in and out of the barrier to take fotos and shoot videos. I think the band played about 30 songs in a quite long concert. To my great surprise, they did play Year of the Rat (it is on the Pot of Gold EP) and also Run. Run is a hard one for Brad to sing as it the register is really high so they had a guest female singer named Nina C. Alice, who helped sing this one (she does not do the high parts though). She actually sang with him on the actual album! So cool to finally hear this one live!!!

There were probably 15 different songs from last year. I was pleasantly surprised. Brad had been sick during the week after catching something at his daughter’s day care so he was still not 100% he said. A keyboard player, Kaj came out and played with the band on 3 numbers, I think. Burning Bridges, Little Sister and Bettina.  The band has a great sound, cool light show with a few projections as well on a couple of songs like Constantinople. It was a great and varied set (See below). The audience liked it a lot and like I said before, they introduced quite a few new songs and some stables like Henry and Mabel, which they had almost always played had been dropped.

Silvana and I hung out backstage with Brad a lot.  Brad has some great stories about hitchhiking around in Europe in the early 90s. Always hard to get a ride in France! He also talked about the old days with the pre-Pothead band, Son of Man. They opened 3 times for Mother Love Bone.  Sounds like they had a lot of funny and stoned times back then as well. It was a great night but we went home at 1 so the band could get some rest for tomorrow. We needed it as well.

I met up with an old college friend, Billy for dinner and then we all went to the show. He had never really heard this band Pothead before. We arrived and got our coats into the coat check just as they started the first song.   IT was the same show as the night before and we again up in front of Brad but not right on the barrier. I did not take any fotos this evening. Brad was singing even better tonight and seem to have more energy and was really having fun. He even surprised the band a few times with some slightly more improvised and wild solos, especially on the track Rude, when Jeff and Robert both looked at Brad like what the fuck was that??? That was cool, man…   The place was totally sold out and packed but the audience is well behaved and people are mostly just into it and not talking lots of cell phone pictures and shit like that.. A few songs really caught me this night like Twisted Tomato, …….. After the show we met Tom again and it turns out he knows my friend Billy.. Far out… Billy loved the show and was totally blow away by Pothead. It was even better than the night before.

I bought the Rumly Oil Pull 2LP on vinyl and Siggi gave me a sticker for my car. Afterwards we hung out backstage again with Brad, and Jeff’s father in law. The conversations were very much more about history and politics tonight. Such a great guy and he really entertains us, I just hope we do the same. I had a great time but was so tired as we did not leave until nearly 4 in the morning…. I will get to see the band’s studio tomorrow!  Another really successful Pothead Berlin experience. Look forward to the next time. Pothead, one of Germany's best kept secrets! Rock and Roll!!!


Encore2: Burning Bridges (with Kaj on piano-keyboard)
Posted by Scott aka. Dr. Space at 12:47 PM