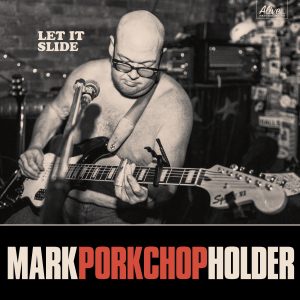 Mark “Porkchop” Holder is from Chattanooga, TN. It seems he often plays or played solo and started off as a busker (street musician) but this album is recorded as a trio. The album features 9 tracks in about 30mins and starts off with the title track which is just a 30 sec solo slide guitar piece and then Disappearing kicks in with an uptempo drum beat, smooth bass and Mark singing and playing slide. My Black Name is a bit more intense track with a longer slide solo. The band does some backing vocals on this one as well. Headlights continues with the mid paced slide driven bluesy rock and roll.
38 is a Johnny Winter inspired track but with out the intense lead guitar but still a nice guitar and harmonica solo as well. Let is Slide-No Doctor is a nearly solo track with only a basic kick drum and tambourine. Sounds like a steel guitar? Great song. Stagger Lee is by far the most heavy track on the record. A much darker sound on this track, with a heavier bass line and cool harmonica giving it a eerie feeling. Great track. Stranger is sung sort of like Johnny Cash and a bit of country. The album closes with the standard Baby Please don’t Go. Mark does not have that unique of a voice or really stand out as an amazing guitar player either. Many of the songs are pretty average blues rock tracks on Side A but side B they really diversify. Check them out….