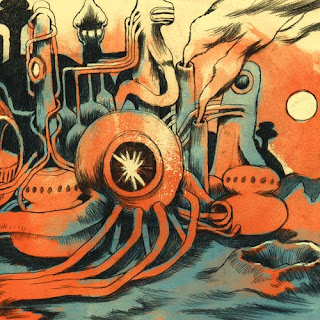 Monomyth are a new Dutch band with the drummer from 35007. It is all instrumental music with a lot of mood and drive. the band are a five piece with one guitar, bass, drums and two synthesizer/keyboard players. The double LP features 6 songs and side A starts off with the track Vanderwaalskrachten. It starts slow and spacey but then slowly builds up and Thomas plays a very cool and intense guitar solo and later the organ takes the lead as it builds up more and more intensity. Great start. Vile Vortices reminds me a bit of Pink Floyd the way the organ and slide guitar is played and the spacey vibe in the track. Then, it gets into stoner rock and a heavy bass line licks in and everything is lifted to a higher level. Wow.. The Groom Lake Engine starts off very spacey and has a really nice slow build. This is really space rock, slowly building a bit like My Sleeping Karma, not in sound, but vibe. Almost predictably, the bass kicks in again and the whole track lifts in intensity and they just take off. First the guitar solo which is intense and quite short and back into the main theme again and repeat the cycle once again with more added organ as it evolves. Now, the next phase of the trip begins with a slow build and this one just stays in the spaced zone for nearly the entire track and then you get quite a surprise when the organ starts to raise the intensity. The guitar plays some freaky stuff that is panned around as are the synths at the end. Spaced out! Now side C and D are each full album side track so get ready. Huygens slowly builds and has a cool third stone from the Sun inspired guitar section as the rhythm section is very steady and repeatitive supporting the long solo section. Then it goes off into some sort of almost like mainstream rock style music and then it all starts to distort and get nasty and build up with the same riff and theme repeated over and over and over and over. I wish they would break out into a killer guitar or organ solo but they don’t until the very end when it all reaches climax. Spaced out ending. Particles has no sound to start the side for like 30 seconds and then slowly the synths and stuff start to fade in, The sound is very far out to start and then suddenly clears like the cloudy sky turning blue. It takes a long time as the synths just get totally spaced out before the rest of the band decides to join in 10 mins later and then it is a very simple drum and the intensity of the synths builds up and they add more and more delay and until it is just reverberating.  If you are fans of Monkey 3, My Sleeping Karma, Colour Haze, you will for sure dig this record. A very cool debut.

http://www.monomyththeband.com http://burningworldrecords.com
Posted by Scott aka. Dr. Space at 7:51 AM