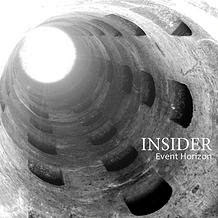 The instrumental Italian band Insider is back with their 2nd release in less than a year after quite a long break between releases. I have been a fan of the band since the old days when they released Simple Water Drops. This new album features 8 tracks in 58mins and some pretty intense heavy riffs and a lot of double tracked guitars. The line up is the same as on the last jam record called Vibrations from the tapes with Marco Ranalli on guitars and synths, Stefano di Rito on drums and Piero Ranalli on bass. Escape Velocity starts things off with a pretty complex track with a lot of different time changes and heavy riffing and some nice chorus, harmony guitars before the main guitar solo section hits, where the wah guitar comes on heavy and in multiple layers til the faded end. Magnetic Field Lines continues in the same complicated mode but with an even more heavy riff until the solo section when some synths come in and he goes into a very beautiful melodic solo. Gravitational Mass slows things down to a more melodic almost doomy feeling (except the sound production is so clean). The guitar solo comes in early on this track. I really like the riff section on this track and marco goes into a killer guitar solo while keeping the melodic one running underneath. Great stuff. Jet starts off with a Slayer like riff and some synths. Eventually Marco comes up with another really killer riff but returns to this harmony guitar theme. Synths come in here and there. Event Horizon is an acoustic track with some really spaced out sounds in the background. This leads into the Expansion of the Universe track, which is a 9 min 6 piece suite. It starts with some really nice melodic guitar and a synth line, which later switches but the focus is really on the cool guitar playing of Marco in this really complex track. The next two tracks are called Black Hole and White Hole. The first track is slower and features some repeated guitar lines and melodies in it’s 8min journey, with the synths coming every minute or so. The riff gets a big heavier at the end and he kicks in the wah pedal as well. I like the opening riff, which he doubles up that starts the last 6min track, White Hole. The synth that repeats is pretty cool as well. This is quite a different record than the last jammed out one the band made and features a lot of really complicated tracks. Enjoy.

http://www.andruidrecords.com
Posted by Scott aka. Dr. Space at 8:08 AM