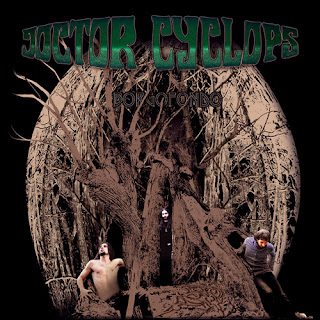 Doctor Cyclops is a new Italian three piece rock band playing some pretty cool stoner rock and roll. Night Flyer opens this CD, which has only 7 tracks in 48mins, which is cool as they often stretch out with some nice guitar solo and jam riff rock sections, like in this opening track. Cyclop’s Claim has that Pentagram like sound and is built on a cool heavy riff that occasionally dips in a more bluesy direction. Towards the end this track has a cool section with this effect on the bass. Great interaction with these players. Giants of the Mountain is a more slow doomy track to start, that eventually runs 10 mins and features Alia O’Brien from Blood Ceremony as a guest. It really picks up pace into the solo section after 2mins before coming back to the slower doomy guitar riff. The last couple of minutes really changes with this funny melodic horn section that really catches you off guard. Eileen O’Flaherty is the only real short track, just over 3 mins. It starts very strange then a more boogie rock riff takes over. Madness Show really shows off the bluesy side of the band before getting much more heavy. My Revolution is a strongly sung passionate stoner anthem of sorts. The Unquiet Garden ends this record with a slow starting bluesy start and even a Hammond organ in the background that leads into the wah guitar section as it builds up. A great song (strange secret section at the end) Pretty cool new band, which I guess must be really good live.
http://www.worldinsound.com
Posted by Scott aka. Dr. Space at 1:10 AM