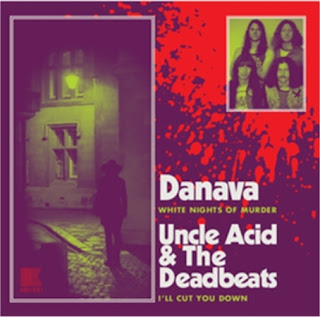 This is the debut release on vinyl of a new band called Uncle Acid and the Deadbeats. Their full length record, Blood Lust, is out now on Rise Above records (Sold out in 2 days). The band has previously released this on CD-R and is repressing it for those who missed the vinyl. The track I’ll cut you Down, is sadly not unreleased and on the LP and CD-R, so buying this 7” for Uncle Acid is a bit of a bummer. A very cool track. A bit like a more garage version of KISS: Catchy but a nice 70s style vibe. The singer has a very special voice and apparently this is a studio project and there is no live band at this time. Danava provide the track, White Nights of Murder, which is also on their latest record. It has a lot of dual harmony guitar stuff and also solos. This is another band, where the singer also has a quite special voice that you have to get used to. This is a fun release for collectors but not much more since both tracks our on the bands latest records.