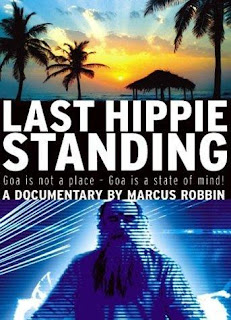 The Last Hippie standing is a really cool film made in 1999-2000 by German film producer, Marcus Robbin. It was originally released in 2002. They head to in search of hippies. It is quite a fun and interesting movie that lasts only about 45mins. They interview a lot of different people at the beginning of the movie asking them what they think a hippie is and where they can find them, etc.. They eventually get to find some and there is some cool archive footage of hippies in GOA from the late 60s or early 70s and they spend a lot of time at the end of the film with three main people: A lady, who is super cool and seems to have recently died, who wrote a book about being a hippie in GOA coming from the USA in the late 60s and ending up in India. Then they also have interviews with GOA Gil and Swami Williams, who have never left after leaving and have really adopted Indian life. One is a swami and the other a trance DJ and also spiritual. It is a fun and very cool movie. Check it out… The extra stuff is not all that interesting compared to the movie itself.

http://www.merlins-nose.com http://www.lasthippiestanding.de
Posted by Scott aka. Dr. Space at 11:36 AM