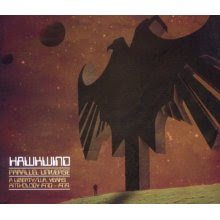 This release has really blown me away. I had no idea that material like this from the early 70s hawkwind era would ever see the light of day but some clever people have combed the archives and made a damn cool compliation of 1970-1974 era hawkwind material that includes rare single versions, studio versions of tracks that were previously only released as live versions and even two totally new never heard tracks (Hog Farm and Take what you Can). The First CD is material from the ear of the first two records from 1970 and 1971. On this disc, 4 tracks really stand out. The original recording of You know your never Dreaming! Wow.. this is significantly different from the one that appeared on the first album, as is the alternative mix of The Reason is and Be Yourself. Fucking cool… Then we hit 1971 and I had no idea that the band had rerecorded Kiss of the Velvet Whip in 1971. Nik sings this on this version and the vocals are not as good as the Dave Brock sung one but cool anyway. Hog Farm is totally unreleased but short track from 1971 sessions. An interesting idea but I can see why it was left behind. The rest of the disc
Now to Disc 2 and we are in 1972 and while the music is excellent on this disc, it is nearly all been released before with four live tracks from Space Ritual and one live track from the Greasy Truckers concert. The alternative vocal mix of Seven by Seven was really cool to hear and the nearly 10min long unreleased track called Take what you can is excellent. A really cool unreleased track from the Doremi sessions. Disc 3 features tracks from 1973 and 1974 and it was amazing to hear the studio version of It’s so Easy and You better believe it. These were only released as live versions previously on the Hall of the Mountain Grill record and a single. Its so Easy is really raw and Dave Brock really plays some damn cool guitar on this one. A few single versions (Psychedelic Warlords and Paradox) are rare but not really unique but the alternative mix of Wind of Change, wow.. that was cool and some real different stuff. Overall, a fantastic collection of the early years and many rare tracks.