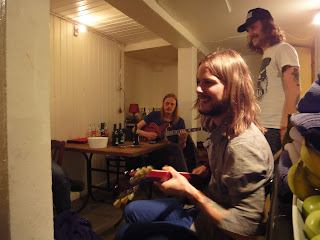 Graveyard, who I consider myself to be good friends with were back in town for their 4th gig in . Not sure when the last time we hung out was but when I showed up it was like a greeting of old friends. I congratulated them on having a number 1 record in . They were really blown away by this and all 4 release parties in were all sold out! They were flying at the moment! We talked about a lot of things including set lists, jamming, Axel leaving Spiders, bands they had toured with, them going to open up for Iron Maiden, etc.. We had a few beers and just a real nice time before the show. I completely missed the opening band, which I was told was terrible. Super cool people.

The place was totally packed and they had a really cool banner on the front of the stage and they were in a good mood (but a bit nervous that I was recording the show for my own personal use). They played about 50-50 new and old numbers and the new songs came across great. I especially like this title track, Hisingen Blues and Uncomfortably Numb. I was really surprised that people were so into it. Very unusual in that a 70s band like this gets this kind of response. The band plays the songs more or less like the records with no real stretching things out or experimenting. Axel was an animal on the drums and so hot, he just played in his underwear, since he forgot his drumming pants (he said!). The sound was not very good as the drums and bass were too loud in the room and the soundman not doing much about it despite complaints. It did improve some at the end of the show but still the drums dominated throughout the concert and it should not be like that. This is rock and the guitars need to be the dominant instruments. Some sound guys just don’t get it. 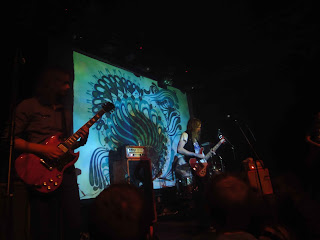 The encores were short and intense and Axel did a little drum solo in the middle of that song Granny and Davis from the b-side of the Hissing Blues 7”.  At the end of the next song, they did a recap of Blue Soul, which was cool and then the show ended. I think they played about 65 mins or so. They did not have a written set list since they play the same set every night with maybe 1-2 different songs so they don’t have to write it down. They promised to change the set for the festivals this summer. We will see… I had a great time. Check out these two videos of the encores. Sadly they had no vinyl records to sell as I know many people wanted these. I should also say that the light projection guy they have along did a really cool job. 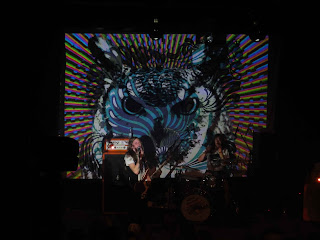