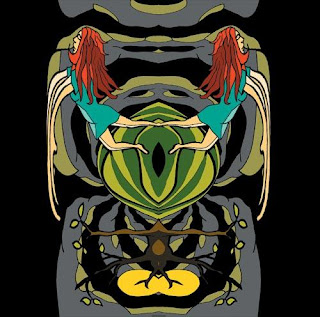 Sula is busy releasing his new bands music on these limited edition CD-rs, which is great for his fans as these are generally quite good recordings and performances as the band is a highly improvised unit and playing well. This double CD set features 4 pieces, two of which are very long (57 and 47 mins each) from a concert from 12/30/10 in . The artwork is really cool on this CD. So what about the music? Sleepwalker starts CD 1 and is 57mins and starts with mostly a heavy repetitive bass in E with Sula making sounds. The real guitar does not come in for many minutes and the drums start around 5 mins. A very heavy intense psyched out wah guitar kicks in at 6½ mins. While Sula is freaking out I get a bit bored with the monotonous bass playing but she does use a few effects now and then. This is a very long journey and you have to be very patient and perhaps stoned. Around 17 mins the jam is almost dying out. Sula does not seem sure in what direction to take the jam at all but starts to come in with a more intense guitar again after some delay riffs at 20 mins. Anyway, this jam is very long and searching with several slow sections where not a lot happens. Not the bands most inspired jam. CD2 starts with Baba Lali’s Monotronic OM and it starts with a repeated bass sound that slowly gets louder and louder and then the band starts to go somewhere. It takes around 8mins before things get going but sadly the sound has changed a bit from the first CD and now the bass and drums really dominate and the guitar that Sula plays is too low in the mix when the drums really kick in. What happened to the sound? At 13-14 mins Sula is playinig some delay guitar stuff and Lulu some bass effects but it sounds like Sula is in the other room compared to the other instruments. Anyway, I did not make it through describing this jam due to the lack of guitar. Manic Farewell ends the show (which it sounds like there were not a lot of people left by this time) and lasts 25mins. 9 mins has gone by and not a lot has happened yet. It is like the band is waiting for Sula to do something and everyone is quite hesitant. Still Sula is too far in the background. 23 minutes in now and Sula has not really played much very interesting that I could hear and has been noodling away in the background and nothing very manic really happened. If you are a fan, check it out, if you are new to the band, don’t buy this one. 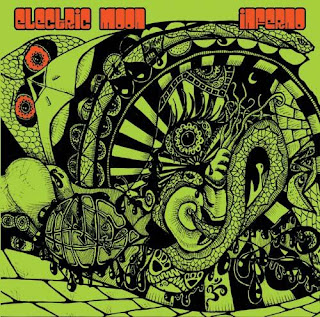 Electric Moon- Inferno (Sulatron st cdr 012)
This is a new Electric Moon CD that was recorded at Amöbrnklagraum Mackenzell on January 5th, 2011. It features two tracks and a new drummer named Alex. Dave plays the guitar, organ and loads of effects and Lulu plays the bass and effects to make a spaced out recording. The CD starts with the 14min Mental record which starts with a repetitive bass line and Sula slowly comes in with the guitar. It is a very nice melodic guitar line but then Sula really plays some cool spacey and psychedelic guitar with a nice use of the wah pedal. Inferno is a monster 52 mins long! So how does one go about describing such a track. It is a very long jam with Sula leading the way with a lot of dynamic and variable guitar and interesting use of effects. Sula, although previously a killer bass player, has been really become a great lead guitar player. I am quite impressed. If you like long spaced out jams, for sure you will dig this. About 15mins into the track Sula plays some organ and then the soloing gets really psyched out. Then it slows down a lot and they space out around 30 mins Sula plays some really nice delay guitar as the track builds up again. Later on Sula is more or less torturing his guitar and freaking out totally. I would have liked to have seen him in the studio doing this part! Anyway… you get the idea. If you like Electric Moon, you won’t be disappointed with this either.
http://www.sulatron.com http://www.myspace.com/electricmoons
Posted by Scott aka. Dr. Space at 9:27 AM