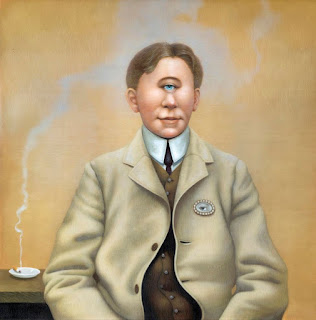 The only time I have seen KC was back on the Deconstruction of Light tour. I thought it was a very cool show. This time Fripp is back with three drummers (the one on the right (Gavin) was doing little or nothing 20% of the time and could probably have been gone, although he did a brilliant drum solo in 21st Century Schizoid Man!), Tony Levin on bass, a guy who played Sax and flutes (Mel) and the main guitar player and vocalist, Jackko. A pretty intense set of musicians. Mel Collins, Gavin Harrison (Porcupine Tree), Jakko Jakszyk, Jeremy Stacey and Pat Mastelotto.

They made it very clear both with big signs on the stage and with announcements in Danish and English that they would not put up with photography of any sort and if you were caught you would be thrown out. Only after the show was over could you take pictures of the band. NO audio or video recording was allowed either. Very strict and they had people looking out all the time.

They opened with some orchestral stuff (Monk Morph Chamber Music) and a triple drum solo and then into Hell Hounds of Krim (was this the guitar solo?) and maybe Lars Tongues and Aspic pt 1.  They played a lot of cool old stuff in the first 72min set including a great version of In the Court of the Crimson King and Sailors Tale!  Fripp allowed the band to do most of the playing and finding his own space in the sound but some sections of nearly every song he would sit and observe. He had a sort of keyboard that he could do mellotron stuff on as well but one of the drummers, Jeremy Stacey played a lot of keyboards as well. More than Fripp.  Fripp only played a few longer guitar solo parts in the entire show, mostly doing riffs and stuff that filled in the spaces.  Jakko was an excellent vocalist. I was really impressed.

The 2nd set was also around 70mins and they played Starless, Easy Money, Red, and 21st Century Schizoid Man (only encore) as well as something from Vroom, I think. A few tracks from the 80s were played as well. Tony Levin and Pat were just amazing this drum and bass duo. Wow.. I think you could easily ditch one or two fo the drummers as Bill Bruford if you watch the early 70s videos was a monster drummer and now they need three to replace him! Ha….. It was a fun show. Glad that I went.  Much better thatn the last time more a focus on classic era KC stuff..