From Farm to Space- An Illustrated Guide to Nasoni Records 1996- 2011 by Dr. Rainer Präger 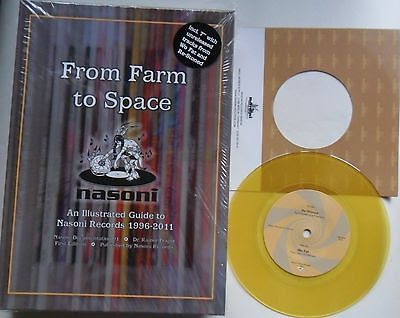 From Farm to Space is a book about the history of the Berlin based record Label Nasoni Records. The label is a very important on in the psychedelic music scene in Europe and continues to this day to release many albums each year.  The book is printed in only 250 copies and must have cost a lot of money to print as virtually every page of the book is in colour. It also includes a 7” record with unreleased tracks by the Re-stoned and Wo Fat, two bands that had their early records released on the label.  The book is set up primarily by year but there is a nice introduction about how the label was started after Hans-Georg was inspired after visting the Texas commune of Wulfgang Zendik in 1992-93.  Released related to the Zendik Farm were the first releases.  The label played a huge role in building up artists like Vibravoid, Sula Bassana and bands that he played in, Earthling Society, La Ira De Dios, Los Natas, Causa Sui, Wo Fat, Siena Root, etc…. Many of these bands were totally unknown before Nasoni started to release their records in Europe. Every record released between 1996 and 2011 is given at least two pages in the book with details about every edition of the albums and CDs that were printed including colours of vinyl, and numbers produced. For some bands like Vibravoid, there were often many pressings. For some of the releases there are also press releases, record reviews, and other things included related to the releases..  IT is a great book and sure to be a collectors item with so few copies printed but it is not cheap at 70€ plus postage!!

http://www.nasoni-records.com
Posted by Scott aka. Dr. Space at 2:09 AM