Unfortunately, I was only able to attend one day of Sweden Rock this year, the friday. There were a lot of really cool bands every day as usual but we had seen many of these and decided we could only afford to go one day. The headliner on the weds was the Danish band DAD. We had seen them a few years back on the Rock stage and they put on a great show but not a band I felt I needed to see again. My friend Tom’s band, the Order of Israfel was also playing on that day and I have still never seen them. We had seen the Quireboys just the year and also Hell, maybe two years ago. The headliner on Thursday was Def Leppard, which we had no interest in seeing at all. I would have liked to see Spike’s Free House with Simon Kirke doing a FREE set and FISH doing one of his last sets ever. Slash, Carl Palmer’s ELP, Exodus, Ghost, Toto, and Airbourne were some of the others playing. Saturday the headliner was Judas Priest. Other cool bands playing that day were: Riot V, Ace Frehley, Mother's Finest, Nuclear Assault, The Angels (Angel City in the US), and Behemoth.

The Friday was a great day and we arrived early enough to catch one song of MOB, a Swedish metal band and then over to see some of Dark Tranquility, the singer Mikael Stanne I have met each year at Roadburn for the past few years but had never seen his band. They play melodic, progressive death metal. I was quite surprised how well the audience seem to know the band and were really into it. They had some great tracks but it was not my kind of music with those kind of vocals. This was apparently the first show with the new bass player.

Next we went off to see Scott Biram, a one man nasty blues man from Austin, Texas. He has been touring around in Europe for the past few months playing every where including Roadburn. He was very enjoyable and the small crowd was really into it as well. He made a kick drum beat and played both acoustic and electric guitar and sang mostly about drinking! It was great to see they finally moved the Rockklassiker stage after 4 years of complaints. Sound pollution from the other stages was much less now, which was great...

Molly Hatchet were back at Sweden Rock but the first time ever on the main Festival stage. The weather was hot and fantastic with a light breeze. They had the stage set up for a 5 piece band but only four showed up. NO Dave Hlubek? I had never heard of Molly Hatchet ever playing as a 4 piece before. There are so many dual guitar parts. Anyway, they blasted through the same set they played last time here and I guess they play every night. Don’t think they played anything later than the Devil’s Canyon record. Crowd liked them and Bobby was totally in fire on the lead guitar but the sound just really missed that 2nd guitar. A wounded version of the band. If Dave is gone for good, this is now a band with no original members and no one in this line up even played on the songs that make up 85% of the set. IF they can stand on their own now, they should play most the songs they have written. At least try that next tour and see what happens?
Set List: Whiskey Man, Outlaws, Gator Country, Fall of The Peacemakers, Devil's Canyon
Beatin' The Odds, Son of The South, Jukin' City, Dreams I'll Never See, The Journey, Flirtin' With Disaster

Alestorm was next and this is a really fun band. Pirate metal from Scotland! I think Sue and I last saw them at the Pagan Fest in Vienna and that was a blast. The crowd was totally ready with plastic swords, pirate hats and a large pirate flag blowing in the air. A sort of thrash metal with keyboards and lots of songs about drinking, screwing and killing and full sing along choruses… Not a band I would listen to at home I think but great fun live.

Rock Goddess. Wow.. a band I never thought I would ever see. They reunite with all three original members and this was only their 2nd show in 35 years! I have all the old records and 7”s… I loved them in the day,  A bit more heavier than Girlschool on the first records… Anyway, the girls rocked the house and are better musicians today than back then so sounded great. Her voice was really ballsy as well. They played a really cool set and did not only stick to old tracks but played three brand new numbers as well. I really dug it…

Set list: Satisfied and Crucified, One Hot Night, Two Wrongs, This Time, You’ve got Fire, To be Betrayed, Flying, Take your love Away, Make my Night, Drive you Away, This is the Day, My Angel, Back to You, HM Rock and Roll.

We were able to catch a bit of Manfred Mann’s Earth Band and that really surprised me. He had a few pop hits in his day but the band really were jamming and having a great time. It was more a blues rock set. I dug it. We only heard about 35mins though.
Blackberry Smoke, who we had seen the night before were next on the Sweden Stage and their was a pretty big crowd and the weather was amazing, We sat up on the hill with a great view and enjoyed the great southern rock… They did not play anything different from the night before having had to leave out some songs for their 75 mins set. Crowd loved it and they had the best sound of the entire festival. Great sound man… 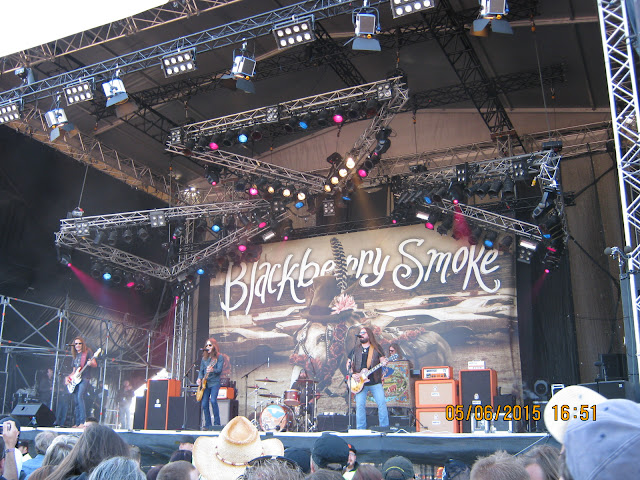 Set List: Six Ways to Sunday, Let me help you find the door, Like I am, Crimson Moon, Pretty Little Lie, Fire in the Hole, Rock and Roll again, Good one com in’ on, Sleeping Dogs Lie-Your time is gonna come-Sleeping Dogs, Holy Ghost, Wish in one Hand, I ain’t got the blues anymore, Up in Smoke, One Horse Town, Payback’s a Bitch, Ain’t much left of me

Next up was Opeth on the main festival stage. They had a few backdrops and let the music do the talking, We sat on the grass pretty far away but you could hear it perfect and see them on the screens. It is great to see this band having progressed into a full gown prog band and leaving most of the death metal behind. They had a lot of long complex tracks and only played the occasional older song from what I could see. They got a full 90mins which was great.

20:45  Backyard Babies or Pat Travers Band???? Sue and I choose Pat Travers and our Swedish friends went for BB… Last time I saw Pat Travers was here at SRF, like 6-7 years ago. He had some totally different players in the band. I saw him for the first time in 1979!  Always good and here he played a mix of blues and his 70s rock stuff. It was a really excellent set. 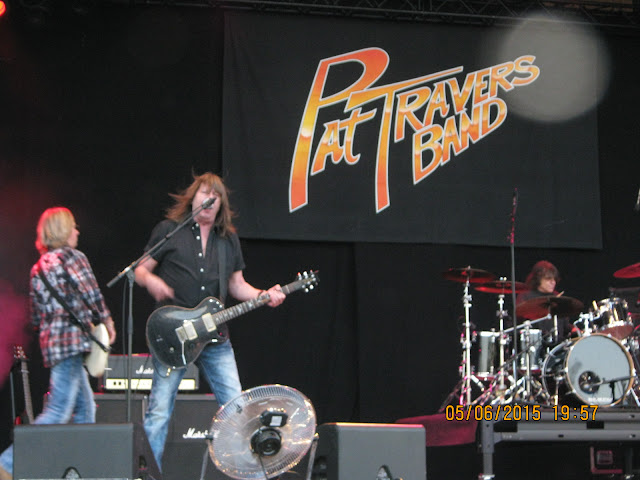 Now, your choice was Motley Crue or Lucifer’s Friend, an old German band that was playing their first show in 28 years!!! Look to be nearly all the original members and included John Lawton on lead vocals. He sang also in Uriah Heep some years back. I would probably never get a chance to see these guys ever again and Motley Crue I saw in 1983, 1984, 1986, and a few other times in the last 10 years and knew what to expect from them.  Anyway, Lucifer’s Friend was excellent! Real cool progressive rock with a dark side to it. They played a range of songs from all their 70s records it seemed.  I think they played about 70mins. Very cool show.

Set List: Intro, Pray, Fire and Rain, In the time of Job when Mammon was a Yippie, Keep Goin’, Dirty Water, Rid it High, Key´board solo, Moonshine Rider, Did you Ever, Burning Ships, Fugitive> Ride the Sky, My Flying Lady 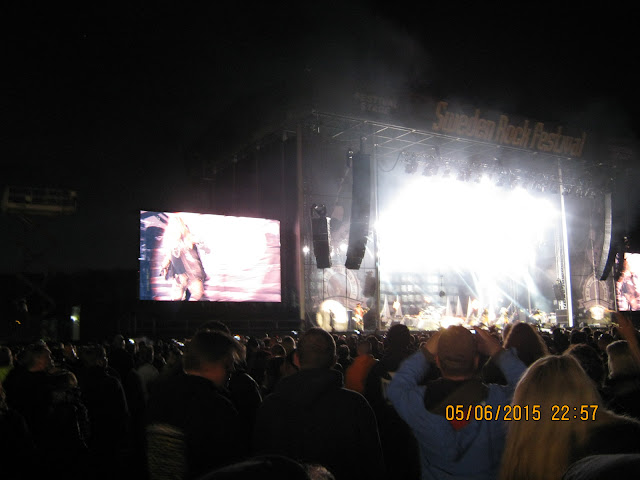 We did manage to catch the very end of Motley Crue from Mick Mars guitar solo, Live Wire, Too young to Fall in Love, Girls, Girls, Girls, Kickstart my Heart, Home Sweet Home. They had a very cool stage and lots of pyro. Vince was not sounding all that good though and look quite heavy…… still ran around lot and had some girls on the stage to help out with backing vocals and to distract…. I think people liked it but the local newspaper only gave them 1 star….

Always great to be back at Sweden Rock!  The tie dating on the camera is UK time so it is one hour behind the real time in Sweden...  Hope to go to the festival next year.. Let's see what the line up is like..