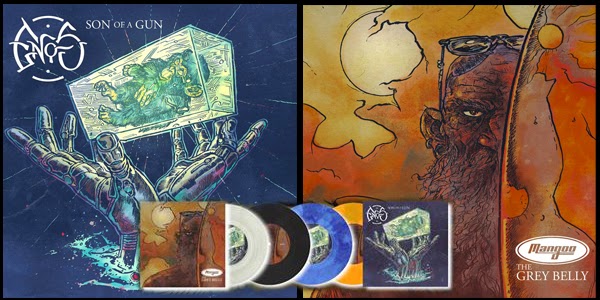 This will be released on March 26th but go on sale on March 1st. Only 300 copies on clear (50), black (50), clear blue (100) and clear orange (100). It is a new split 7” with Enos from xx and Mangoo from Finland. Son of a Gun by Enos starts things off in a quite heavy way with a real rocking groove with a heavy guitar riff from this band with two drummer, two guitars, bass and vocals (six guys total). Awesome song.
Mangoo, has previously released a record on Small Stone, so you know what genre you are getting… The Grey Belly is a more mainstream stoner rock with the way the vocals are sung but the music is pretty adventurous with a lot of cool elements like congas, some spaced out keyboards, unexpected jams in strange directions… then back to the normal… A very nice 7” with two long songs..