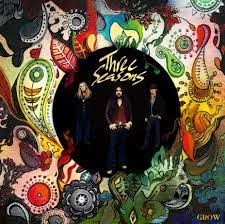 This is the 3rd record by the Swedish trio formed by singer and guitarist (he also plays the organ) Sartez. You might know his voice from the band Siena Root or Mouth of Clay. Anyway, this is his band and this nearly 50min record features 9 excellent songs from 4 to 10 mins in length. The record was recorded totally analog and sounds really great when you crank it up. The record opens with Which Way in a dark psychedelic fashion with some nice Spanish guitar and a slow build with some delay on the vocals and then it opens up to a very happy mood. Sartez sings wonderfully on this track and there is beautiful melodies on the guitar as well. Drowning is one of my favorites on the record with it’s cool wah guitar, great use of the organ and the killer groove and great guitar solo… Amazing song…  By the Book starts with a melodic bluesy guitar and a more relaxed feel. Tablas of Bahar is the longest track on the side at 7½ mins and it is an instrumental track with a lot of nice organ and guitar. The bass playing by Olie is really excellent as well. Christian is playing the drums and is rock solid as well. These guys plays awesome together and remember most of the tracks on this album developed out of jamming…. Anyway, at the middle break, you might think they were going to break into the old Joe Walsh song, Rocky Mountain Way but they don’t! Another lovely song but without any tablas despite the title.  Flip the record over now for Food for the Day. This is a pretty hard rocking track with some lyrical content about the state of the world. No Shame starts off slowly with just guitar, voice and organ before the main riff kicks in. Passionate singing.. this guy is amazing… There is a beautiful organ solo followed by a bluesy guitar solo. Home is Waiting is a mid paced blues rocker as well. The very passionate track, Familiar Song ends this great record with a long nearly 10mins jammed out track with long organ and guitar solos. Brilliant.. If you are a fan of Siena Root, you will probably also dig this.. This is probably the bands best record. Such excellent songs.