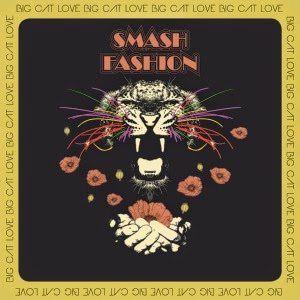 Smash Fashion is a totally new band and feature Johnny Depp’s old band plus a few others like Roger Deering on guitar and vocals. The rest of the band is Tony Kinman (bass), Repo Kauppila (drums), and Lloyd Casson (lead guitar), so of which you might recognize from other bands….. a bloke named Nigel Mogg, plays bass on three of the tracks as well. Anyway, the CD features 12 tracks of high energy retro glam influences with a lot of attitude, clichés and rock and roll. The lyrical themes are quite funny, real life LA and catchy and I have to say many of the lyrics are quite cleaver like on Just a Kiss at the Starting Line (A love song!), Slam Glam, Blame it on the Brandy (drinking song) and Big Cat Love… Anyway, this is a fun rock and roll record but the band are not breaking any new ground. They have made a solid, fun, happy semi-commerical record with a lot of catchy songs. It’s only Rock and Roll and I like it, attitude.. Check these cats out…..

http://www.smashfashionmusic.com
Posted by Scott aka. Dr. Space at 12:46 AM