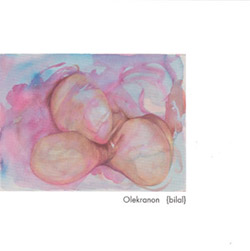 I have no idea how many CDs this project has produced but I have reviewed a few of them. This is probably some of the more intense stuff. This sort of dark, noisy, industrial music is quite hard to describe but I will give it a try. I might not get through all the tracks for you though. There are 10 tracks in 42 minutes and only 500 copies made. Adamkam starts melodically for a brief period before the intense industrial sounds overtake the soundscape. This has a very uptempo beat and low fi sound and is quite intense with a repetitive noisescape that occasionally fades into bliss and back. Engles starts slow and spacey with the electronic buzz hiding in the background but ready to leap out and attack the senses quite soon. The programmed drums-beats enter in and then the sound evolves as the layers of noise rise to the surface. A very cool track. Brng yvwh is a short track but I really quite like the melodic spacey thread that runs through this one as the intense noise gets louder and louder and a almost voice like electronic screams out at you. Deka is back to a darker almost scary theme. Bilal is a very noisy track with what sounds like a very highly distorted voice trying to cut through the distortion and frantic drum track and then it changes direction and cool bass line kicks in. Might be a bit like Chrome? Mouths Flame is almost 6 mins long and has many different levels of intensity, starting quite slow and spacey in a deep space electronic hell of sorts. Half way through it is like someone turned the channel on the deep space probe and now we enter into another alien world. Cool track. Sunblind is a spacey electronic piece that slowly builds into a quite intense end. Daisycutter has no beats but just aural intensity floating back and forth through the speakers. Master Swine actually starts like a proper track with a clean beat and repetitive ringing and someone electronic frequencies are being adjusted and slowly take over the soundscape as it repeats over and over and the high frequencies really space your head out in this track. Be careful. The CD ends with Deitus.  I am not at all sure what instruments the guy making this music uses but he creates his own special universe of sound for sure. I review very few things sounding anything like this!
http://www.housepig.com
Posted by Scott aka. Dr. Space at 9:47 AM