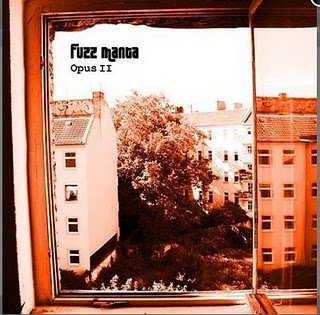 The Danish 70’s stoner rock band Fuzz Manta is back with the 2nd and very different release. First off, I am much happier with the sound production on this record than the last and they have come up with a really strong set of 8 songs in 45 mins. The release is pressed only on vinyl right now in 500 copies. The LP starts off with a slow, heavy but very catchy track called Motumann. Freddy plays a really good guitar solo. Man with no Face is next and a very Deep Purple inspired and excellent number with Jesper Bo playing some cool organ. He plays on two other tracks as well. Quiet Monday is a slow acoustic, electric blues track that sounds as if it could have been recorded in the mid 70s. Freddy could have played more solos on this one as the last 1½ mins is mostly strumming guitar and light singing. Lithia’s Box is a track that is not on the vinyl record and is 8½ mins long. It has a heavy rock riff and some good dynamics. Freddy has a long solo section on this track and plays a bit of Robin Trower like stuff. Turn Around is one of the tracks that will remind people more of the band’s first record, with it’s basic riff, taken from the stoner genre but the rest of the song is more melodic. Cool and different song. White and More has a pretty complex song structure compared to most of their songs and a lot of great dynamics. Corrosion is a foot stomping rock and roll number including Jesper on the piano. Let me Walk closes the record and is a fantastic 11 min track where the band really stretches out and explores heavy blues rock and it even included a drum solo. Very 70s…. I think this Danish act have made an excellent record. They are one of the few bands in making this kind of music and the only with a great female vocalist. The plays a local concert at Dragens Hule tomorrow night (April 2nd) if you are free.
http://www.myspace.com/fuzzmanta
Posted by Scott aka. Dr. Space at 9:14 AM