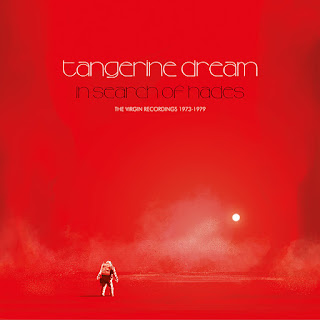 Tangerine Dream is a very special band. While I have not followed their music since the 80s, I have tapes of all their albums up until about 1988.  My favourite era though is 1973-1979, which is the era that this box set focuses on.  This amazing box set features 16CD plus two blue ray DVDs with 5.1 mixes by Steven Wilson of the only two albums that the original multitracks were available as well as the restored video of a performance of the band from Coventry Cathedral 1976 and a German documentary also from 1976.

The first folder with 8 discs features mostly all unreleased material!  Phaedra sounds amazing and on top of that you get a couple of hours of stuff they recorded at the same time including the different versions and takes (some of which are very different) of the title track.  Onto 1974 and you get the unreleased soundtrack for Oedipus Tryannus mixed by Steven Wilson.  Then 4 more CDs of two live concerts both from London June 1974 and Oct 1974.  One has to remember that back in these days the bands concerts were totally improvised. They did not play anything from the records, nothing was pre-recorded, etc… Every show was unique.

Six of the next 8 CDs include the following albums: Rubycon, Richochet, Stratosfear, Encore, Cyclone and Force Majeure. These all sound so amazing and also include unreleased bonus tracks or new mixes by Steven Wilson  or rare compilation or 7” tracks.

Disc 10-11 are a complete 2hr show from Royal Albert Hall, London April 1975.
Sadly, no more of the multracks were available so the only albums you get in 5.1 are Phaedra and Richocet plus the Oedipus Tryannus soundtrack.  These do sound quite amazing and the book is very informative with a lot of amazing pictures and stories.

https://www.tangerinedream-music.com/index.php
Posted by Scott aka. Dr. Space at 3:17 AM