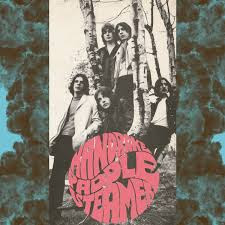 MPS was a London band that existed between 1967 and 1970 (later shortened their name to Mandrake). These recordings are all unreleased and taken from session between in 1968 and 1970.  The title track starts things off with a rock track that features some keys a bit like the Nice but a more heavy guitar. Solitair Husk starts off with organ and guitar and is inspired by 1967-68 Deep Purple for sure.  Drumming is quite frantic on this one. Stella Mermaid is from 1970 has a quite different sound production on this 7min track. Nice organ playing on this track, which has a mysterious feel to it, like it could have been in a Hammer Horror film but then it has this nice melodic side to it. The World Whistles By has a funny lyric and voice style at the start. This track gets quite psyched out with some cool guitar as well. Upminster Windows has a bit of Syd Barrett and early Floyd inspiration but then it changes quite a bit. Doris the Piper (hear track below) takes us back to that horror film start but then it gets more dramatic but then flows with some beauty but still heavy at times (even though the audio is a bit deteriorated).  Great song.  The Doorway to January is instrumental and features some very nice organ and guitar work. Simple Song has a drone organ and guitar to start and a heavy build up, in what is another instrumental track. The October Country is the last track on a pretty damn cool and eclectic collection of songs. Good find Guerssen!