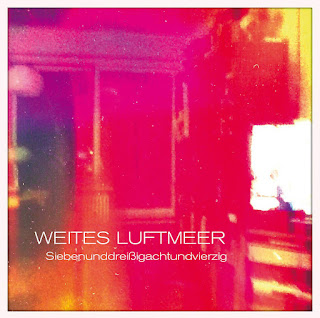 Tonzonen is back with another release, their 20th. This is a label I have only discovered fairly recently and I really am enjoying their releases a lot. This band hails from Munich, Germany and have been around since 2012. The duo have been described as making instrumental psychedelic shoegaze music…  The album features 4 long tracks and is released on black and magenta coloured vinyl in 500 copies total. Side A starts off with a track that borrows a guitar line from You know your only Dreaming from Hawkwind. Nice grooves and bass lines as the guitars are more floating and ambient.  Cool song with quite a build up at the end. Buoyancy another nearly 9min track starts with some bass and then a slow spacey build again.  Clearly the guitarist, Jochum is a big fan of Dave Brock,even though he does not do very make solos and is more of an atmospheric guitar player. Anyway, after 3mins a more melodic strummed guitar section kicks in and it goes like this until nearly the end but with a cool build with the drums and bass. Trail of Thoughts is an 11min mellow journey that slow builds up with a few more effects on the guitars here and there but overall very mellow. Oxykotin starts with a bass line and some spacey effected sounds as the guitar slowly fades up with a nice riff and then the drums kick in! Nice groove and later some cool flanged out wah guitar. What a great number. Cool record but I could use some more guitar solo!!!