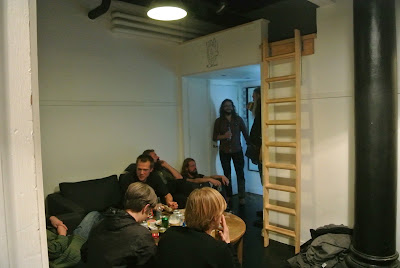 I arrived at 19 to the back stage and the band was all hanging out and the smell of marijuana was in the air. The mood was great and everyone seemed to be in the perfect mood for the weekend… They had had some nice sandwiches (Danish style) and a beer….. The show was going to start at 21:30. I bounced between the room with Guf and Anders (the bass player) and Anders (the sound man) and over to the one where Morten, Henrik, Sven and Anders (the drummer) were sitting. We talked about all kinds of stuff from vinyls made from CDs, concert memories, music streaming, and many other things.. The mood was so great. I have known all these guys since nearly the time I arrived in Denmark in 1997. December 1997, I first saw On Trial and became friends with Henrik. Since then, I have seen every band that these guys have played in together or on their own, many times… It is really an honor to be friends with such incredibly gifted and talented musicians and songwriters. They all do their own thing and when they come together for the magic, we call Spids Nøgenhat, and it is amazing!!!

The concert on the first night blew my mind. I had not seen the band since the Den Grå Hall show in Christiania a year ago.  This night was a lot of the same songs in a different order but some really cool spaced out versions. Two from the first album and two from the new one were not played this night compared to last year. I don’t recall the Christiania gig as nearly as far out on some of the songs.. I felt like they played it safe that night but not tonight. Morten had an incredible guitar sound and the way he mixed with Henrik was so psychedelic.  Both are just great guitar players but totally different in their styles.  The band does such great covers of classic Danish songs from the 70s like Tommerclaus (Når Spindelvævene Blomsterv) from 1975, Røde Mor (Lil Johnny- a very political band from the 70s), and others..

The 3 songs that really stood out were Jørden Kalder, Hva’ har du taget?, and Lil Johnny… such great improvs and playing.. The Udkoks was also really awesome and sounded like 1967 Pink Floyd to start and then off into some Hawkwind territory also.. A great first night…

I arrived a bit later today and gave some of the guys an A4 picture that I took from the night before and we had a chat. Morten did not arrive until about 20:50 but was in a good mood. A few different guests backstage tonight compared to the previous night but lots of beers and joints and a great mood again…

The band started off quite a bit more stoned tonight. It was the same set of songs but some how less together than last night. Morten was on fire last night, while today Henrik was really more aggressive, and intense in his solos, perhaps..  Guf sang amazing again on the vocals but he had some problems with the tuning of his 12 string acoustic guitar and in the end had to ditch it and play the 6 string and it is not quite as lush sounding. (Turns out two strings were broken on the 12 string). The jams were different tonight as well and did not gel as well but were still really cool and seemed a bit shorter.  Sebastian had some issues with the lights so they seemed more intense yesterday but still super psychedelic. I shot some videos so let’s see how they look…  The highlights were probably Hva har du taget and Lil Johnny, where the war visuals were really intense today and Morten did some really cool stuff with feedback… Far out…  They did a cover of Green Grass- Du er min allebedste Ven, which was different from the 1st night (or was it?). The show ended with Kommer med Fred but tonight instead of the whole band it was only Morten and Guf singing it and it was less drawn out.. quite short….  What a great band….  Do I go for a 3rd night in a row??  I will later post some videos but I have to work on the audio first. 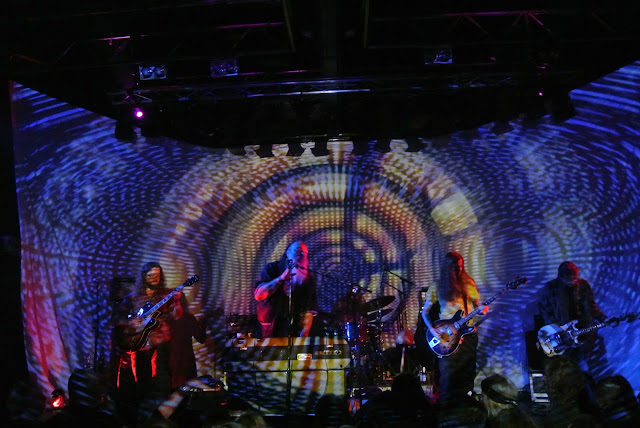 I arrived about 20 and the guys were all hanging out and in a really great mood again. I gave them the CD with some artwork of the show from the night before as the recording came out really amazing..  We had some laughs about different stuff and we talked about Guf’s guitar issues, etc..   The crowd was a bit slower arriving tonight but the band hit the stage about 21:30. The set list was exactly the same but the band played the songs the most together of any of the three nights and Guf sang amazing, again.  Hva´har du taget was really awesome tonight and they for the first time, extended it a third time. That was cool. The lights were not as vibrant tonight though as their was a green or blue light shinning across from Morten’s side and it was just lighting up the stage too much. Seb finally killed it at the encores, and the rest was much better. Pity..  The encore songs were great and Udkoks was more wild at the end but not as jammed out. No Hawkwind like section tonight but wild enough to get Morten on the floor working his pedals with the rest of them.. What an amazing 3 nights. Sure, I wish they would have played a few different songs but great songs are great songs and this set is full of them..  Enjoy the videos from this night.. One of the best ever Danish bands and thanks for the friendship and amazing hospitality!