US Christmas- Run thick in the Night (Neuroot Recordings 074) 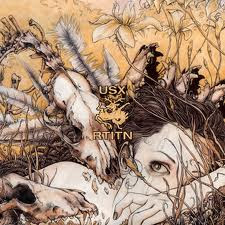 US Christmas is back with a new full length CD. It features 13 tracks in 77 mins and rumor has it that it will be released on vinyl by Relapse records. If you are unfamiliar with this band, they play a unique brand of spaced out psychedelic blues and space rock. The CD has wonderful artwork and all the lyrics to the songs. This CD has a lot of variety and quite a few acoustic songs with mostly guitar, vocal and violin. In the Night is a 13 min track that starts things off. It is a slow building psychedelic space rock monster with some very intense vocals at times. They really know how to create this psychedelic sound like old Hawkwind and the Spacious Mind.  Wolf on Anareta sounds like old school Hawkwind and is a heavy mind fuck and some very intensely shouted vocals by Nate. Pounding, penetrating space rock. Fire is Sleeping is a short 3½ min track with a mournful violin and acoustic guitar. Nate sounds amazing when he sings like this compared to his “in your face” shouting style on the intense tracks. Fonta Flora starts with some spacey sounds and a nice slow beginning as this one slowly builds up in this instrumental track. The violin is also prominently featured and then some killer spacey guitar is played as the band take it to another level of intensity. Great song. Ephraim in the Stars is a slow spacey track with stoney vocals. The Leonids is a short 2½ min piece that leads into Suzerain. This is a dark bluesy mysterious track and Nate’s intense singing voice returns. Some will probably find some of the music on this CD depressing but it does not effect me in that way. I think they just write and play very intensely. Maran is a 4 min track that is again starts slowly, melodic, bluesy and spaced at times but gains in intensity with another spacey guitar solo. The Quena is a very spacey instrumental track and is followed by Deep Green. Deep Green starts almost like a raga with a single guitar (ok, quite a few of their songs start like this), before the bass and drums kick in. The spacey slide guitar on this one is very cool as it slowly evolves and features these repeated like vocals that make it very psychedelic. Great track. The Devils Flower in Mother Winter goes back to the acoustic guitar violin vocal style. A beautiful song. Only 2 more tracks left and the band still have some intensity left. Mirror Glass is a short track that leads into The Moon and Flesh and Bone, the last track on this long album. It features a great spacey slide solo. Overall this record is more laid back with fewer uptempo tracks than their other records but the psychedelic spaced out vibe is still amazing. Powerful emotional music for psych heads.
http://www.myspace.com/uschristmas
Posted by Scott aka. Dr. Space at 10:56 AM