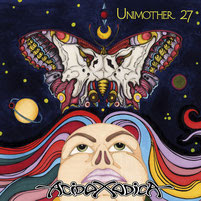 Pierro is back with his 2nd record in 2 years. This is his 6 release under the name Unimother 27. Pierro has played bass in the cool Italian band, Insider as well. I really enjoyed the last record a lot. This album is based on a dream, a palindromic dream, which he based the songs on. The CD features 7 tracks.  Ossesso start things off with a very clean sounding drum sample or real things (not that organic sounding though and then Pierro plays a repeated guitar riff and some amazing guitar work over the top. Opporti a me non é mai Troppo follows and features a more melodic guitar solo. A quite simple bass line chugs along with the simple percussion and hand drum. Allunare era nulla starts with a synth drone and some guitar sounds and after about a min, a high hat kicks in underneath the solo guitar.  This was a pretty cool track. A Valle tra masse essa martellava starts with a main reverberating guitar and some synth drones underneath that slowly change. After a few mins, another guitar riff is recorded and a slow guitar over the top while a more funky bass line and the thin percussion sounds. This track has an interesting feel and vibe to it with the melodies of mystery. É corte e atroce starts with the simple tambourine and some hand drums and nice double layer guitars. They rhythm guitar track is really nice on this one and mixed a bit to the right side. Arte Tetra is the 7th and last track.

It is a real pity that Pierro does not have a real band. He is a brilliant solo guitar player but I just found something a bit lacking with some the rest of the instrumentation this time around. It just does not really feel that together somehow? He has to play them all one at a time and the play to the next layer. I guess he starts with the percussion, then bass and then solos? Check out the interview below.

When did you start making music?

Piero:
I started making music in 1989 with my brother Marco Ranalli.          The band was called “City Sewer System”, the music we did was a kind of psych garage rock, a style similar to The Stooges. With this project we recorded three demo-tapes and I played the bass. Then in 1991 we started playing as power-trio with “Insider” (SpaceDoom –Rock style) and also in this project I played the bass.

AcidoXodica is your 6th record under the name Unimother 27 since 2006.  Do you still play with Insider or other groups?

Piero:
In the next Insider album, which will be released in spring, I recorded all the bass tracks. But I'm not part of the group anymore and I do not even play with other bands, so I will not be in live shows or in future works of Insider. It is my last participation in this project. I can not give my commitment to Unimother 27 and Insider in parallel. I would do two things superficially. So in the future I will dedicate my time only to Unimother 27, then if people will call me to collaborate on projects ... I will decide if I can!

How do you go about recording your Unimother 27 records since you play all the instruments yourself, often? Describe how you make a track.

Piero:
In my first three works I was totally alone, from "Frozen Information" there is Mr. Fist on drums and percussions. I don’t use a fixed method to write the music. A song can be born from an emotion, from a melody that I have in mind, from a dream. I take inspiration from what surround me. I record in my studio (Pineal Gland Lab) with a multitracks digital recording. I haven’t problems of time, I can work in total calm. Sometimes happen some songs take form during recordings, others are already complete in my head, others directly grow from improvisations. So I record in my studio all the parts of guitar, bass, synth and when there is inspiration or the song requires also the voice ... then Mr. Fist in his studio records all the rhythm parts. 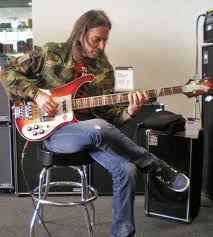 You new record came from a Palindromic dream. What do you think inspired this?

Piero:
I do not know, I just remember that it was a very lucid dream. Even after I was awake I realized that it had left very strong and indelible signs. For several days I was obsessed with this dream and I thought that the best way to get rid of it was to give it life through music. This gave me the opportunity to observe it better with detachment and to appreciate it.

Have you ever played live as Unimother 27?

Piero:
No, I've never played live with Unimother 27. It started as a studio project. I am considering this option more and more seriously because I receive proposals from people to play in their clubs or at festivals. we'll see ... I have to organize the live set!

You wife makes some very cool artwork. I love the stuff on Fiore Spietato. You worked with another artists on the new record though.

Piero:
Yes, it is true. My wife knows how to shape my visions, in "Fiore Spietato" that "AcidoXodicA" has worked really hard. It starts, of course, from a much larger format that is scaled to the CD. I collaborated with another artist in "Frozen Information" Donato Costantini, who created the cover by overlapping papers, newspaper or magazine clippings. In the first three works I made the covers with my photos.

What is the music scene like where you live in Italy?

Piero:
There are really a lot of bands, as regards psychedelia, which is the musical genre closest to me, like In Zaire e Squadra Omega. In my city, Pescara, there are Insider, Zippo, Sherpa ...

Do you travel outside Italy ever to gain new experiences for music?

Piero:
This is something that has never happened to me. I would love to use a year to go to other continents and absorb the vibrations of other cultures. How did Embryo in the 70s ...