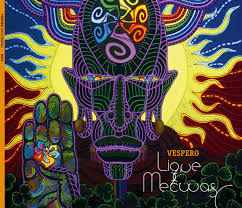 Vespero are back with their 14th album, not including Eps etc.. A very productive Russian band that started back in 2005.  I have to say this is the best thing I have ever heard from the band and have been spinning this album a lot lately. Wow..  The album is a little over 70mins long and features 7 tracks. The band is also 7 members including violin, sax, wave drum. The Course of Abagaz starts things off with some tasty guitar that is complimented by some great percussion and drums as it slowly builds and the layers start to come together with space sounds and grooves with great solos. The track dies out around 7mins and they head into a new direction and an almost dub like groove starts but the music is really spacey. Cool stuff in this 17min track. Ras Dashen features some beautiful saxophone playing and complimented with synths, violin and cool drumming.  It slowly becomes very eastern in feeling. Oromoo’s Flashing Eyes is driven by the drums and violin to start and a really groovy bass line. About 2 ½ mins in the sax kicks in… Some great guitar playing as well. Abyssinian Ground speeds things up and has a very cool drum rhythm and groove over which the violin, keyboards and other sounds mingle well. Intense. Around 4mins the guitar really kicks in. Isidore’s Prophet starts with some spacey synths, hand drumming and sax as it slowly builds. Very jazzy and a killer groove on this one. Follow the Fitawrari is another super grooving track where everyone gets to make a cool solo and play a part, starting with the violin!  A sort of Moroccon like thing going on. Gnawa… Next up guitar and what a solo around 7mins.. Cool stuff. Amazing bass playing on this track as well. This one really blew me away. The CD ends with the Emperor’s 2nd Self and this is much more relaxed but some of the guitar is pretty psyched out, while the sax and violin in laid back. Pretty awesome 70 min record.

http://raig.
https://raig.bandcamp.com/album/vespero-lique-mekwas
Posted by Scott aka. Dr. Space at 8:20 AM