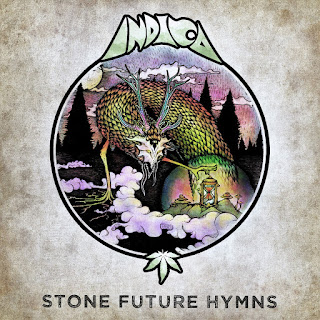 With a name like Indica, I would hope the band would play some stoned psychedelic music and they do!! The band is a spacey five piece doom metal act from Australia. This album was released digitally earlier in the year on the bands bandcamp site and other places but will soon be out on vinyl on the Tonzonen label out of Germany. The album features 5 tracks in about 40mins. The opening number Silence is killer a slow doomy one with some spacey vocals and the occasional space sounds/noises to compliment the doomy riff and groove. Inner Mind Arise is a longer track and continues the slow doomy path to oblivion with Craig (noises) being a bit more prominent in the mix on this track. Pure Doom.. OM is a track they released in 2015 on bandcamp. Not sure if this is a rerecorded version or not. A slow and spacey start before the crushing doom kicks in. Reminds me of Arc of Ascent a bit. This track is the first to have any sort of lead guitar and has a cool jammed out part with more guitars and not just riffs and lots of noises from Craig. Cool stuff. Goat of Mendes is a faster track a bit like Sleep at times and then classic doom like Trouble. Slow Burner is the last track and 16mins in length! A nice melodic beginning leads to just drums at 2mins and then a slow doomy build begins with some singing but mostly instrumental. Around 5mins buried in the background is an organ playing. Long slow and doomy to the end... Check it out below.

The band has another full album on bandcamp. One fan wrote, Sons of Otis…. Not as spaced out as that and more straight forward but still some heavy stuff..


https://cannabaceae-indica.bandcamp.com/album/stone-future-hymns
Posted by Scott aka. Dr. Space at 2:56 AM