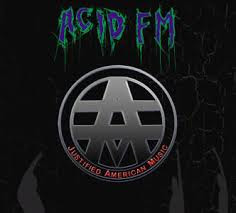 Sparky Simmons and his band, ACID FM, have released their first full length record on his own Monster Fuzz label, which had previously released a really cool Monster Magnet tribute record. The CD features 11 original tracks and closes with a cover version of the Black Sabbath classic, War Pigs. The band is a three piece and the sound is lead by Sparky on guitar, lead vocals and synths (there are not many). He is not a great singer by a long shot but he puts a lot of heart and soul into these songs and his singing. Just accept this and get onto the rock and roll that proceeds. The CD starts with In the Blink of an Eye. It is a mid-paced melodic rock track. Atomic Revolution reminds me a lot of old Cheap Trick! Desire has a more heavy metal riff and a cool phazer guitar effect. Ride is a pretty straightforward rock song, short, no guitar solo or break at all, really.  Alive is a more heavy metal style track with a melodic guitar hook to start but then the rough guitar line kicks in. A short lead guitar solo bursts out between the frames of the song eventually. Reflux is a longer track where the phazer guitar reappears and a more spacey cool mid-section is played out but they too quickly return to the reframe. Damn, as this is one of the best tracks. Anyway, by this time in the record, I have become convinced that this band really needs a lead singer. I hate to say it but Sparky just does not do it for me. No Simple Plan starts with a delay guitar and is more melodically sung and is like a sort of indie rock song and just the length for the radio. Don’t stop is maybe the longest track on the CD and starts off with a guitar solo and then it becomes a pretty normal track with fairly juvenile lyrics. The mid-section slows down and has a spacey guitar that is mixed very high (but I like that) before the track goes back to the formula that is used in far too many of the songs. News at 11:00 has a more heavy metal guitar riff and quite funny lyrics. It also has the best guitar and longest guitar solo on the entire CD! Bleached is a really nice change with an acoustic track and hand drums. Nice lyrics as well. No Name starts with a really cool distorted bass line but does not progress much from there.. The CD ends with a cover of War Pigs by Black Sabbath. It is a pretty ambitious track to try to do and I have to say, the band does not really deliver the goods on this one. They play it totally straight but fall flat when it comes to the passion in the vocals and original intensity…  Go to the bands web site and check this record out..

http://acidfm.com http://www.monsterfuzzrecords.com
Posted by Scott aka. Dr. Space at 12:02 AM