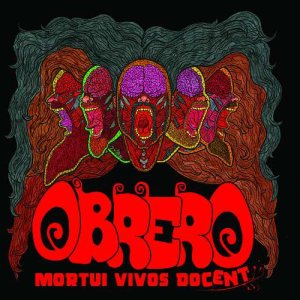 The Swedish label, Nighttripper are back with their 3rd release. Despite the name and title, this is a Swedish band and features members from a number of Swedish Death and Trash metal bands Talion, Phidion, Melting Flesh, Bloodbanner and Protector. This five piece play stuff that is more influenced by the dark Italian metal scene and bands like Pentagram, Trouble and Mercyful Fate. The CD starts off with the Wolf’s Hook and I really like the vocals of Martin Missy (Protector) and the grooves and heavy riff on this track. Reminds me a bit of Mercyful Fate without the guitar solos and screams. Son of Tutankhamen is another 7 min riff monster with powerful vocals and some dark stuff mixed with more stoner rock style stuff but still no solos. Svantovit starts with a cool funky bass line and melodic groove with a cool flangy guitar before they kick into their standard sound plus some keyboards. The Fourth Earl is the 4th track and you might start to tire a bit of the same style riffing and vocal style, which is similar to what you heard on the first two tracks: mid paced Doom-stoner riffing. Octaman is a bit doomier and some nice harmony guitars that remind you a bit of Trouble but with no guitar solos. Charles the Hammer has a more stoner groove going but they also use the harmony guitars nicely and this one reminds me of Candlemass during the vocal chorus parts. There are some keyboards on this one as well. Exterminate starts with a spoken word piece from some classic movie before the doomy riff kick in on this most melodic track also with mood keyboards and a sing a long like chorus part. The record ends with The Lost World, which starts a bit like a movie soundtrack song for a horror film and then it takes off and could fit in with any other track on the record. I like the brief bit of wah guitar that kicks in now and then, where it sounded like he might actually play a solo. This is a pretty cool record but the guitar players just keep it very simple with riff after riff and never really go anywhere very exciting with their playing and just play it safe all the time. There is not a single real guitar solo on the entire record!