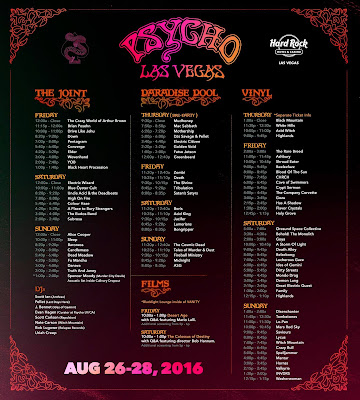 This is not a full review of the festival as I choose early on that since my band was playing at 5am, it was necessary for me to conserve energy and try to be more relaxed and see friends and a few bands (I have seen more than 50% of all the bands before) and just chill..

The Hard Rock Hotel and Casino is a trippy place. People can smoke everywhere (except the elevators), which is pretty rare anywhere in the world. Great ventilation though so it did not seem that bad. As usual in the desert, it is cold inside and fucking hot outside. UP to 40C (104F) on the hottest days. Fun to see lots of people from bands, of which Matt, Jack and Nick from Elder, we seem to see all the time!!!

We arrived in time on Thursday to meet the organiser (Evan) and his staff while it was not too busy and could chat and get things sorted that had not been sorted out before we arrived, like the extra night of hotel, food for the 4 days, etc… all went smooth and Remy, Ronnie and Evan treated ØSC just great…. Thanks...

Sue and I saw Golden Void, Electric Citizen, and some other bands. The Sound guy at the pool was shit on the first day. Terrible kick drum sound, too loud drums, often too low guitar unless you stood on the guitarists side of the stage and he paid no attention to the keyboards. You heard basically nothing from Issaih’s wife in Golden Void and nothing from the keyboard player from Electric Citizen. Sad that he paid such little attention… it got better and was generally great but too loud on the other days… Most bands played too loud in all the halls at the festival. Our room on the 9th floor faced directly at the pool stage so we heard all the bands if we are in the room, whether we wanted to or not, including the terrible hip hop and techno that started at 11 until 6PM everyday!

Other bands playing on the Thursday were Fatso Jetson and Greenbeard (before we arrived), Mothership (we were having my birthday dinner but everyone said they killed it!), Mac Sabbath (this was really fun and crazy.. People were really into it. Mudhoney ended the first night..

There were a lot of great bands on this day but all we managed to see in the main hall were Wovenhand (very cool set and a great sound in the main hall), Elder (killed it!), Pentagram (they played a great but predictable set ending with 20 buck spin). Out at the pool The Shrine just totally blew me away.. What a great energy these guys have. Death, an old black anarchist band from Detroit were really cool as well. We missed the late night Zombi set. In the Vinyl hall we saw a bit of Holy Grove and late at night I got to see Ashbury! Wow.. I never expected to hear these guys. This was pretty awesome… Sadly, we were too tried to see The Crazy World of Arthur Brown but everyone said it was great!

Sadly, Colour Haze did not make it due to visa issues so they moved Boris from the pool stage to the main stage. On the main stage on this day we caught, the Budos Band and saw nothing else (BOC, Boris, Subrosa, Uncle Acid, High on Fire, Electric Wizard) but what a lineup!! I have seen all the bands before except for Subrosa and Budos band, which I really liked a lot.

Out at the pool we only saw the Luminerians but we heard Jucifer and Acid King! Bongripper also played. In Vinyl, we managed to catch some of a few bands on this day: Dirty Streets was my favourite though. We also saw a bit of Mondo Drag (great), Ides of Gemini and then we and to get some sleep as ØSC was playing at 5am!

We got up at 4am, I had a shower and headed down to the venue to meet the band. I was wondering if anyone would be there. There were about 100 people for the 5am show. I had met Evan, the organiser earlier in the day and he said he would be there but I never did see him and I understand.. Anyway, we had a lot of trouble setting up and getting the sound right so it was 5:25 before we really started the show. People hung in there and our guitar players totally blew people away… It was fun…  I did not get to bed before 8am though. Check out the show below.

I had to get up to see Truth and Janey and it was worth it! They were the first band on the main stage playing for about 200 people. They surprised me by just jamming out and playing only 1 song from their album and only 4 songs in 45mins! Cool stuff.

At Vinyl we heard a bit of Spelljammer and saw most of the Mars Red Sky show as I had never seen them. The bands played so loud in Vinyl.. Damn…   They were running about an hour behind on this day.  At the pool it was another killer set of bands with ASG, Midnight (a lot like Motorhead), Fireball Ministry (we did not hear them), Tales of Murder and Dust and the Cosmic Dead, who spaced everyone out!!

I guess you could say this is about as close as the USA gets to a Roadburn Festival but just to clarify a few things.. It is much more expensive here and the atmosphere is totally bizarre, being in a casino. Not the relaxed nature of going outside and between the buildings like in Tilburg. It was a pretty relaxed atmosphere towards weed though as at nearly every concert you could smell someone smoking or vaping. I did not see any hassles with the police or security despite a bit too much of a presence.  Amazing festival…. wow…. Congrats to Evan and the staff for pulling this one off…