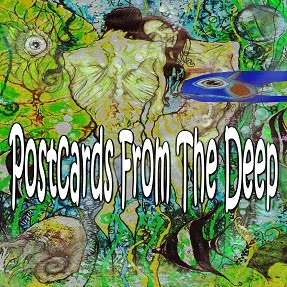 This is a pretty unique and ambitious release. 10 one sided flexi-discs, 10 postcards, poster, and CD in a unique clamshell box…… Flexi discs never really had such great fidelity and are not known for being able to be played many times (maybe that’s why you really need the CD this time!). Anyway, it is a cool idea and it will cost you 27£ plus shipping if you want to own one of the 700 that will be produced. It features 10 somewhat obscure and some of the most popular bands from the Fruits de Mer catalog including Astralasia, The luck of Eden, The Thanes, Schizo Fun Addit, Crystal Jacqueline, The Crawlin Hex (a new band from Fred from Earthling Society), The Loons, The Past Tense, The Blue giant Zeta Puppies and Icarus Peel. All the bands perform cover songs of mostly pretty obscure bands from the 60s like the Hippies, Dragonfly, The Sorrows, Laurie Johnson, Count Five, Calico Wall, the Pretty things, Brainticket,  Satori and Donavan. Alot of very cool versions. I was impressed.

http://www.fruitsdemerrecords.com
Posted by Scott aka. Dr. Space at 11:55 PM