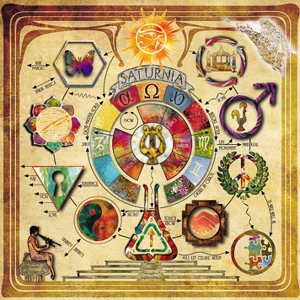 Luis Simões is back with a double CD of very cool music recorded between 2007 and 2011 in . It is the 5th album recorded under this name. Unfortunately, I have not heard all of them and many are out of print and difficult to find. He plays all the instruments himself and it is a wide range of instruments including strings (Guitar, bass, drums, dulcimer, sitar), keyboards, synthesizers, flutes, drums, gong, etc… Very impressive. They lyrics are really cool and special as well. The 9min Utopia starts the psychedelic journey and reminds me a bit of Vibravoid. Aura is a spacey floating track with some very nice flute. Obsidian Spiral is a very psychedelic track with sitar (highly effected), acoustic guitars, layers of keyboards and synths… trippy.. Arcadian Watcher starts very floating and spacey like a Pink Floyd dream. It sounds like harp at the beginning of the track. Now the drums are back in an uptempo track with many layers of synthesizers, piano, and a dramatic synth pad voice that sounds like a long drawn out “ahhhhhhhhhh” that is repeated over and over at intervals. Rings of Smoke features Stefan Koglek (Colour Haze) on vocal in German. Clepsydra is a beautiful track with spacey electronics, flute, acoustic guitar, electric piano and then the drums come in as you float away in a ring of smoke.. This one really builds up and he plays some cool heavy guitar riffs and solos. Amazing track. Alpha Omega is the longest track on CD1 at 13 mins and starts also with a very dreamy space state and some laid back vocals, nice electric guitars, occasional sitar drone, etc… Mikado Players and Lotus Eaters is an instrumental track that closes the first CD. A very Pink Floyd inspired track.

CD2 starts off with Moving Mandala. This is a very groovy track also with some sitar, the first real sitar playing. It also has a really nice keyboard solo towards the end. Trance Dance has the drums mixed quite a bit back compared to the other tracks, with again a real Pink Floyd floating vibe and spacey vocals, cool synths… He plays a nice guitar solo in this track with a bit of a Portuguese flavour to it. Mellifluous is another dreamy track with some cool synthesizer work and some of the most psychedelic stuff on the CD. Specialists of the Invisible is a 4min song with just layers of synthesizer sounds and some bells. Tetrahedron has the heaviest guitar riff of any track on the CD and starts with a lot of spacey intense synth sounds that kind of fade away as the uptempo pace of the track takes hold and the eastern feel kicks in. I like the hand drumming on groove on this after so many floating spacey Pink Floyd inspired tracks, I really needed something uptempo, rocking and different. Grand Lodge of Forever starts with some beautiful guitar and spacey synths and organ as he begins a whispery style of vocal. It is a real drifting track and quite amazing. The transition at 3½ is really great and super spacey. The CD ends with Cosmonication. A slow track that is heavy on the organ and keyboards and very spaced.

It is awesome that Elektrohasch is releasing this cool space rock music from . The sad thing about projects like this when it is only one person and it takes him years to make it, that it will likely never be transformed into a live act where you could experience these great songs live and maybe with some jamming.. Great album.

http://www.elektrohasch.de http://www.myspace.com/saturniamusic
Posted by Scott aka. Dr. Space at 7:14 AM