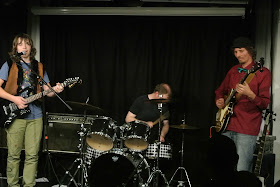 This was an LP release party for a few bands but first up was Yesterdays’s Breed, which is the brainchild of Claus Rosenblad and Sigurd Djurhuus.. I accidently went to the Sort Diamant (Black Diamond) main library and had to message Morten and see where everyone was but it was a different library.. Took about 15mins to get there but they had not started to play and I met up with Morten Aron and his wife, Tom and the guys in the band, whom I have known for some years… Anyway about 20, they played a short set of songs from their record with Søren Pilgaard on 60s keys, Claus on drums and vocals, Sigurd on Bass and Morten Aron on guitar. Siguard and Morten switched on the last track. It was fun to hear these 60s inspired pop rock tracks from the album. Nothing terribly original but well played with a lot of passion in the vocals and drums (also Søren who was singing along!).. They played maybe 20mins.. Then Sigurd, Søren (now switched to drums) and a young hippie kid on guitar and vocals hit the stage and played an old song from 1967.. Donavan or someone like that..  It was very rough but they were into it….    Tom and I said Tilykke and our goodbyes and headed off to Ungdomshuset for a much heavier set of music. I wlll review the Yesterday’s Breed LP soon.. Check it out below.. Cool people.