This was a great night of space and stoner rock. Sadly hardly any people showed up. Most of the guys from Måneskjold were there, Lone, Thomas and Jesper (Gas Giant) and a few Finnish people to see the great bands from Finland.
ØSC started the show off and we played about 75mins and a really cool set. Nicklas from Papir was really amazing on this night. So inspired. Jiri and Martin totally kicked asss on the rhythm section. The newest guitar player to join us on a regular basis, Jacob K,  also played some great stuff. Mogens had trouble hearing but I thought he was great and the sound on stage was great for everyone except for Mogens (who never complained until after).  Cool set. You can hear it at the link below.

Listen to our show! 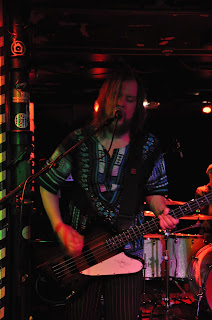 Deep Space Destructors was next and I joined them for the entire show. I really love this band. I have reviewed their two full length CDs and released and reviewed their last release that I put out on my Space Rock Productions label. Nice people as well. The band stayed at my place the night before and we hung out listening to records all night and got to know each other. They had sent me their demo for their new album, which they played nearly all of so I had heard the songs we played. It was so much fun to play with them. Great new songs with cool dynamics. I felt like I added something for sure. We closed the set with an uptempo version of Hurry on Sundown by Hawkwind.. Their Finnish friends said it was one of the best shows they ever played and I should be a full time member! Ha…

Set List: Return to the Black Star, Spacemind, From the Ashes. Journey to the Space Mountain, Hurry on Sundown (Hawkwind).

Boar is a four piece psychedelic stoner rock band from Oulu. They released a record last year called Veneficae on the Lost Pilgrim Record label. I will review it soon for you. Anyway, the had a really high energy and intense stoner rock sound and were totally awesome when they were jamming out with killer bass lines and great leads from both guitar players.  There was only about 15 people up front and into it which was a pity as I thought the band was great. I
Set List: Poseidon, Sahara, Kraut, Trees, Featherless, Sand

A great night.. So many amazing shows at KB18 pity the place is not nicer.
Posted by Scott aka. Dr. Space at 1:54 AM