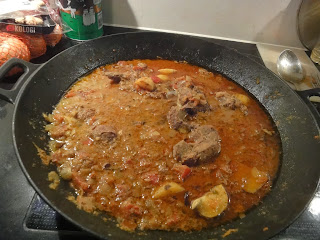 This was the third event organized by Sven and the folks from Kildemose Festival and Levitation Records and it was a great success. 5 bands for 50 kroner. I had only ever heard The Hills from Göteborg who also played at the first Svensk psych night with Flowers must Die. Anyway, Nils and I rode our bikes in the wet cold drizzly weather over to the venue around 20. I had made a very spicy goat curry with naga chile and we shared 3 beers and heard the Somethings in the Water (Rise above Records) compilation and a side of Domovoyd as well before riding out.

Met up with quite a few people we knew right away as Agusa was soundchecking. Sven wanted me to record the night so I tried to find a place to put up the mics but this was not very successful for the first band as way too many people in the back were just talking and not at all interested in the music. Agusa, a new instrumental 70s prog style band from Malmö kicked things off with a fantastic 70min set. The band is lead by Tobias (SKL) on bass and Michael (SKL) on guitar. A fantastic young organ player named Jonas and a solid drummer. We were up front and really enjoyed the set but the organ was mixed way too loud for most of the show. Check out the short video clips. Most of the songs-jams were really long journeys. Cool band.

The place was pretty filled up by the time they finished and incredibly smoky. I could hardly breathe and often had to go stand by the open door. A lot of friends were here including, Tom, Sven, Rene, Morten Aron, Nik (ex-On trial), Nik the photographer, Jan from Kildemose Festival and his friends, lots of folks from some of the young bands around town, so that was cool and actually quite a few women! Anyway, Myreskær (Formic Cut) are a young five piece punky garage rock band. They played a pretty simple and quick 35 min set of passionate songs all sung in Danish. The vocals were the only thing coming out of the PA and they sounded terrible. So dry and harsh, they badly needed some EQ and reverb (it would also continue like this until Magnus fixed it for Hills, who had the mic so low you could never hear them anyway!). The singer was very passionate as where the rest of the band. They really were into their songs. People were having fun and starting to feel the effects of the smoke and alcohol now as the place was pretty lively.
Another quick set change and local stoner-70s rock band Doublestone were up. I have wanted to see them for the past year but have always missed them. Very nice guys when I spoke to them and I tried to encourage them to do some jamming or improve, but I failed. Anyway, Nik (OnTrial), he was up in the front and really rocking and this helped suck all the energy right to the front and Doublestone rocked the place. They did not do any psychedelic stuff at all or try to jam or space out but just played their songs straight up, heads down, ROCK…. Cool band with some great songs, some stoner, more bluesy hard rock with some short guitar solos.  The band is still a bit afraid to step out of the box and to take their songs to the next level although the last track was a bit extended.  Great band and this was a just what I and the crowded needed.
It took 45 mins for Hills to set up. The band has now expanded to a five piece, which is a great thing. The addition of a 2nd guitar player was a good idea. The female drummer, she just totally rocks and the bass was really pummelling the groove into the room. It was not after midnight and some people had left after Doublestone but this was the highlight for sure. The band played a few shorter tracks off their Hills Sleeps record but mostly they just spaced out with long winding jams with spacey keyboards (a bit too low in the mix), cool groovers and intertwining psychedelic guitar solos and riffs. People were in a trance and really liking it. One thing we really missed was some cool lights or projections tonight. All the bands just stood in white lights the entire night. This would have made the entire experience so much better. I think they played for about 70mins. The last band was from Århus Narcosatanicos, playing a sort of psychedelic DOOM. My friend Jens was very disappointed I was leaving but the smoke had just done me in and I could not be trapped inside the ashtray any longer. I was getting a head ache, my lungs hurt…. I hope they were great. They were trying to set up some visuals but it was going to be late. It was nearly 2 now.. A very successful night. Thanks Sven, Kasper and Jan for arranging this.
http://www.kildemosefestival.dk