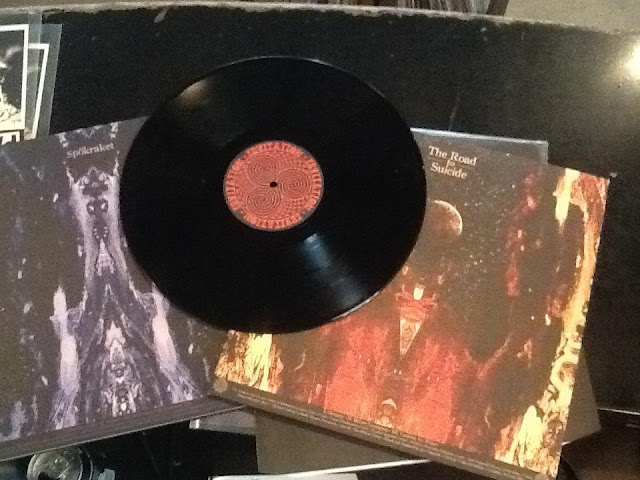 This is a pretty cool split LP with two underground psychedelic rock bands from Denmark. The Road to Suicide side is 3 songs and starts with the sort of dreamy psychedelia of Sleepers. It has this big open sound production that sounds like it was recorded in warehouse (it was recorded at home), a bit like Earthling Society and Spaceman 3 at times. Before Lexington is again pretty laid back and spacey and has some nice solos but two of the guitar players. This one fades out and makes way for the very cool Looking for Water track that starts with the didgeridoo and sitar. The vocals are often mixed quite far away and distant so the focus is the music. Cool stuff. I look forward to seeing them live and their next album. Flip over the record and you get Spökraket, another pretty new band but they have released one full length called All art is Propaganda on the New own Record label. Their side starts with the very repetitive and hypnotic Climb to High which has both a male and female voice that match each other really well (he is deep and her’s rich). The track starts to pick up when the fuzz guitar and voice comes back after a long period of not much happening except the same groove. They climbed pretty high for this one. There is a short interlude piece and then a track called Repetition will save your Life. It starts with cool synthesizer but then this fades away and the very psychedelic wall of sound just engulfs the room. Very trippy stuff. I might have to hunt down their other LP.. Great release.

https://www.facebook.com/LevitationRecords
http://roadtosuicide.bandcamp.com/
Posted by Scott aka. Dr. Space at 9:48 AM