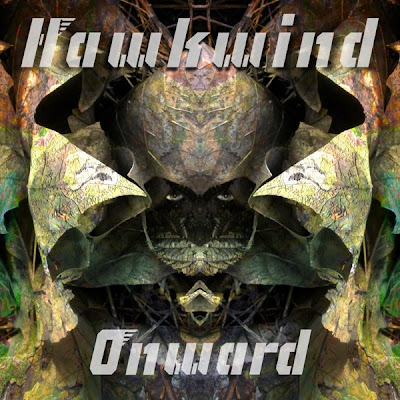 This is the 2nd Hawkwind record in 3 years and the 2nd with the most stable line up Hawkwind has had in many years. Tim Blake only plays on a few of the tracks, while the most of the record are the stable line up Brock, Chadwick, Dibs and Hone. The record was recorded in the bands own Earth Studio. The LP starts with Seasons, a hard rocking number with Dibs singing. Great lyrics. The Hills have Ears is one of the highlights of the new album and is actually sung by Richard and features Huw Lloyd Langton on lead guitar. Mind Cut is a Brock solo track (he plays all the instruments) featuring acoustic guitar and spacey sounds and a deep bass in the background. His voice is sounding a bit frail but characteristic Dave with passionate lyrics. System Check is a strange electronic spoken word track with Tim Blake on vocal. A reworking of Death Trap, (recorded for the third time now) is a strange addition and I am not very fond of this low fi version with in your face vocals by Dibs and thin drums. Southern Cross is the longest track on this 36min CD is a Tim Blake penned spacey instrumental track with that new age tinge that all of Tim’s stuff has these days. A very nice keyboard solo for sure. The Prophecy only features Niall, Richard and Dave is a sort of dreamy laid back track with a melodic thread, but not that interesting and a bit too similar synth feel to the track before it. Electric Tears is another Brock solo track and only 1 min long with these dreamy synths and lead guitar line. The Drive By has the same line up as The Prophecy and a pretty cool bass line as the guitar streams out of the last number straight into this one in a cool way in this instrumental track. The first CD is quite a mixed bag of a few outstanding tracks, a few new age tracks and some stuff that comes across like demos.

Computer Cowards starts off the 2nd CD and features just Richard and Dave in a really psychedelic track and a highly effected vocal, you would not know this was Dave Brock. Howling Moon is another short Dave solo track with some nice bass. Now, the reworked songs start starting with a new version of Right to Decide, which is very close to the original with a great guitar solo but the sound production is much worse than the original, much less balls and really thin weak drums. Aerospace Age Inferno, features now deceased keyboard player Jason Stuart on piano and was recorded in 2008. It has some new twists and turns in this version. The Flowering of the Rose is like a long studio jam track and for sure the highlight of the 2nd CD and also from 2008. Trans Air Trucking is a short instrumental Brock and Blake number. Deep Vents is a short electronic track that leads into the reworking of Green Finned Demon featuring Niall, Dave and Richard. Your 2012 Hawkwind trip has just finished, so you thought! Then comes the longest track on the entire new Onward project, with an 8 min untitled track with Dibs on vocal, more of a spoken word approach. I really like this track, it would have fit well in the real album and been another more uptempo song. Hope you enjoyed it. A solid record but you know what you are going to get these days with few surprises and still way too much filler for my tastes. If you get the double CD deluxe version, you get some bonus reworking of older tracks such as Aerospace Age Inferno, Right to Decide, and Green Finned Demon. The hard bound book and great artwork is fantastic. A really high quality package but if they had left even one of these short 1-2min electronic pieces off it all would have fit on one CD!

I really feel that the way Hawkwind goes about making records this way is never going to really gain them a lot of new fans or get them the young fans that are really into the 70s Hawkwind. If the band could make a hard space rock record with just a couple of these new age electronic space rock tracks, they might have a chance to get more of the younger fans. Never know….