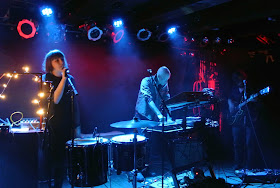 This was the first visit by the fairly new Japanese band, Kikagaku Moyo, to Europe and I was so happy they were coming to Denmark. I own all three of their records and really like the chilled stoney, sitar, 60’s vibe with some Japanese influences. Sue and I arrived early and there was not a lot of people but by the time Moon Mountain started, the people were streaming in at a steady rate. They started at like 9:40 and played about 40mins, I think. They are a trio with a female vocalist who also played a small drum kit and other percussion items. She had a cool voice and used some different effects at times. The young bald man in the middle seem to run the show with sampled beats and effects but also playing some lead and regular synths as well. On the far right was the guitar player who I though was not very adventurous most of the time but sometimes he showed some flair and even did some live looped guitar. Sometimes the reminded me a bit of an old Danish band called Alive with Worms, Sue also though Cocteau Twins (I never heard them). The two techno songs were the least interesting but the ones the crowd was most into! A very young crowd…  The band had an 12” EP for sale. According to their set list Back Door and That’s Right were new songs.

Set List: Back Door, Down to the Wire, happy Child, Breaker, That’s Right, Find the Sun, Reach You. 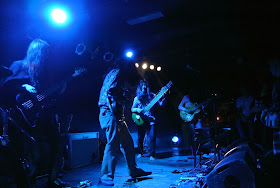 Kikagaku Moyo started off with a short 4min piece with two guitars and sitar all sitting on the stage or chairs (see video) and then the drummer and bass player came out for the rest of the show. There were some songs that I did not recognize so they might be new. They played half of the record Forest of Lost Children and it was heavier live than on the studio album. The concert was cool and I loved the vibe they have with the drummer and Tomo doing a lot of vocals together (the drummer, I think is the one that has the more feminine voice). The only played maybe 55mins and left the stage but the people were not going to let them go and they did two encore songs. That I did not expect. Cool concert…